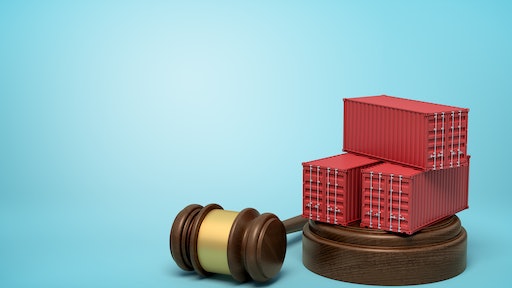 Historically, ocean shipping law reform has been a slow and infrequent process. The first law was enacted in 1916 by then-President Woodrow Wilson and focused on regulating foreign and domestic shipping trade, reinvigorating the U.S. Merchant Marine, and establishing the predecessor to the Federal Maritime Commission (“FMC”), the U.S. Shipping Board. This federal regulatory agency was authorized to grant antitrust immunity to conference agreements and restrict trade abuses. This law was updated to establish rules for tariff filings and rate changes in 1961.

By the early 1980s, shippers and carriers urged the FMC to drastically modernize shipping laws, recognizing the increased use of U.S. trades in global shipping and the explosive growth of industry capacity. In response to these shifts in maritime trade, legislators enacted the Shipping Act of 1984 (hereinafter referred to as the “Act”), which replaced portions of existing ocean shipping laws. The new Act importantly clarified when antitrust immunity applied to ocean common carrier agreements and brought about new changes such as filing procedures for service contracts, the pricing of liner services through the use of negotiated contracts, and clarity on whether conference members may offer intermodal pricing. The new shipping law also revamped the FMC’s authority to review and approve agreements, solidifying the FMC’s role in monitoring the market conditions and carrier activities to ensure competitiveness and compliance. The Act is the foundation for modern ocean shipping laws in the U.S.

Since enactment, the Act has only been updated on two other occasions. Notably, following a study on the Act’s impact on the ocean shipping industry, legislators proposed a radical amendment entitled the Ocean Shipping Reform Act of 1998 (“OSRA 1998). The deliberations over OSRA 1998 took nearly 7 years to finalize through a series of negotiations and compromises by both shippers and carriers. The law ushered in a new era in maritime trade by providing confidential service contracts, enhancing the FMC’s authority to provide exemptions and address restrictive trade practices of foreign governments and state-controlled carriers, and terminating the authority of liner conferences with respect to regulating members’ service contracts. More importantly, OSRA 1998 pivoted away from rigid regulatory oversight to a free-market model, thereby lowering the FMC’s oversight.

Following the major revamp in 1998, in 2018 then-President Donald Trump signed into law the Federal Maritime Commission Authorization Act of 2017, which primarily addressed antitrust concerns regarding the increasingly consolidated ocean shipping sector and the prominence of ocean carrier alliances.

The new OSRA bills mark the most significant update to the Act since 1998, shifting the pendulum back to increased oversight by the FMC. Unlike their 1998 predecessor, the new OSRA bills are moving at a breakneck speed in response to current market conditions and allegations of unfair conduct by ocean common carriers ranging from nonperformance of valid contractual obligations to unfairly favoring high-priced trans-Pacific imports over U.S. exports largely consisting of agricultural items. While these bills are similar in spirit, the House bill zeroes in on alleged carrier misconduct whereas the Senate bill more broadly addresses issues afflicting the industry.

Currently, negotiations are ongoing between the House and Senate for the China competition bills. The House’s America COMPETES Act includes OSRA 2021. The conference will determine, among other things, whether the ocean shipping reform bill will remain a part of the larger competition bill or placed on a separate legislative track. Due to the broad bipartisan interests in the OSRA bills and the White House’s support, it is more likely that OSRA will be incorporated in the final conference bill in some form. If the bills are placed on a separate legislative track, the House and Senate will need to reconcile the different versions, which are described below.

The House passed OSRA 2021 (H.R. 4996) by a bipartisan vote of 364-60. John Garamendi (D-CA) and Representative Dusty Johnson (R-SD) introduced the bill to enhance the FMC’s effectiveness as a regulator. OSRA 2021’s revisions to the Act include but are not limited to:

The proposed revisions include but are not limited to:

As the supply chain issues exposed by COVID-19 are further aggravated by other global events from the Russia-Ukraine conflict to continued shutdowns in China, the significance of calculated short- and long-term reform is clear. Whether the proposed revisions outlined in the OSRA bills will be effective in ensuring a resilient and enduring supply chain will depend on factors such as the FMC’s resources. With the enhanced authorities granted in these bills, the FMC would require greater funding and staffing to oversee the increasingly complex shipping sector and enforce the new amendments. Further, there must be consideration as to the benefits and risks to substantive revisions of the Act. Both versions of the bills skew in favor of U.S. shippers and have been subject to heated debate. While frustrated shippers argue for greater regulatory oversight to ensure fair and equitable conduct by carriers, carriers advocate for thorough vetting of any revisions to the Act due to concerns of unnecessary federal regulatory oversight and the risk of further slowing the already delicate supply chain system.

As key stakeholders work to create a stronger supply chain system, all involved in the movement of goods are encouraged to follow actively and evaluate how these changes may impact business operations.

Understanding the root cause or causes for supply chain disruption is key in deciding whether and to what extent insurance may be available.
Lathrop GPM LLP
January 27, 2022

To come out ahead in a post-pandemic era of strategic sourcing, leading companies will look to tech-enabled collaboration, visibility and risk management to integrate strategic sourcing functions and minimize disconnects across the board.
Workday
November 24, 2021
Follow Us