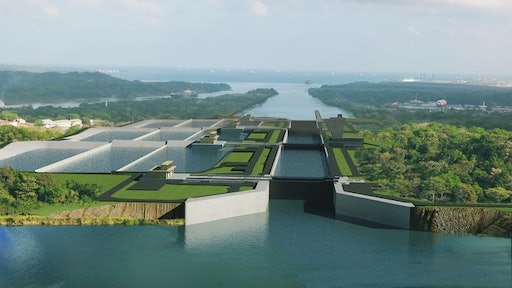 March 24, 2016—Panama will inaugurate its newly expanded canal on June 26, nearly two years behind schedule, the head of the state canal authority said.

"With the inauguration of this project, we will claim once again our historic vocation as a route of transit and a meeting point of civilizations," the Canal Authority's CEO Jorge Quijano said at a ceremony alongside Panama's President Juan Carlos Varela.

"We are aware that the enlargement work has not been easy," Varela added. "Despite the setbacks, successful progress has been made toward its completion."

The massive, multibillion-dollar project had originally been scheduled to end in October 2014 but has been successively pushed back. It has suffered construction and labor problems, legal issues and the discovery of fissures in one of the widened locks.

Weissman selected NGC based on the company’s fashion industry expertise and its ability to provide a comprehensive solution, from product concept to customer delivery.
NGC Software
August 4, 2020

Lam plans to significantly increase the volume of parts produced by AM over the next five years and is working with VELO3D for new ideas in novel materials and designs in metal additive manufacturing or 3D printing applications.
Lam Research
August 4, 2020

Humans will be augmented by robots in ways that will result in productivity, efficiency and safety gains.
Deloitte LLP
August 4, 2020

This will be the largest and most technologically advanced facility in the Ruby Has network to date.
Ruby Has
August 4, 2020

As a medical device manufacturer, D&K is tasked with quickly ramping up new, complex engineering and production processes within a highly regulated environment.
iBASEt
August 4, 2020

The site supplies partners with parts and accessories for commercial vehicles and passenger cars under the Mercedes Benz, smart and FUSO brands in more than 150 countries.
Daimler AG
August 4, 2020

Ranpak is launching its next generation cushioning solution for sustainable packaging, which reduces packaging times and protects light to heavy goods during shipping.
Ranpak
August 3, 2020

As you re-establish operations, here are some challenges that will be common to all, but also measures for addressing them.
SnapFulfil
August 3, 2020

IPSi helped Grant Industries identify that a mobile approach was the solution – the ability to create a label in proximity to the product would be a significant improvement to their process.
August 3, 2020

UiPath-commissioned survey evaluates the influence of COVID-19 on automation adoption and the future of work
UiPath
July 28, 2020

Urban Outfitters Inc. has appointed TGW to design and implement an automation solution for their new fulfillment center in the UK. The project is due to go live in 2021.
TGW Logistics Group
July 28, 2020
Follow Us