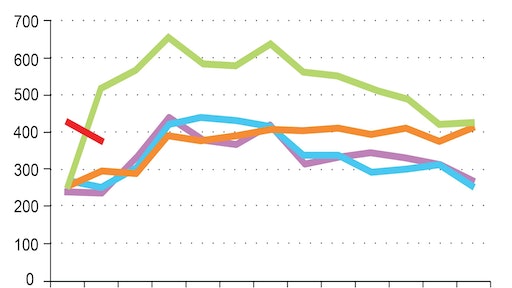 Portland, Ore.—Feb. 17, 2015—Spot market freight volume declined seasonally in January, down 11 percent from an atypical December high, according to the DAT North American Freight Index, an indicator of truckload freight demand and capacity. Volume slipped 27 percent compared to January 2014. It was the first year-over-year decline on the index in 19 months.

Compared to the market conditions of January 2014, freight volume by equipment type declined 27 percent for vans, 35 percent for flatbeds and 0.7 percent for reefers.

Reference rates are derived from DAT RateView. Rates are cited for line haul only, excluding fuel surcharges, which declined on both a month-over-month and year-over-year basis. The monthly DAT North American Freight Index reflects spot market freight availability on the DAT Network of load boards in the United States and Canada.

Note: Beginning with January 2015, the DAT North American Freight Index was  rebased so that 100 on the index represents the average monthly volume in the year 2000.