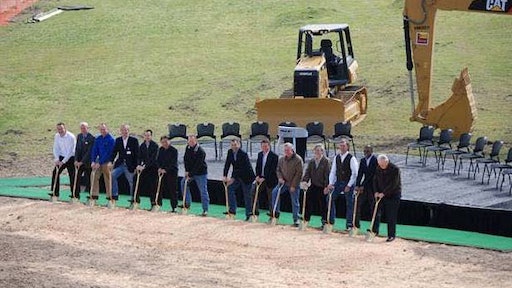 Houston—March 7, 2013—Mitsubishi Caterpillar Forklift America Inc. (MCFA), a manufacturer of forklifts under the Cat lift trucks, Mitsubishi forklift trucks and Jungheinrich brands, recently broke ground to begin the expansion of its Houston-headquarters manufacturing facilities. The multi-million dollar expansion will increase the under roof production capacity at MCFA’s world-class facility by more than 40 percent.

The company celebrated the planned expansion with a groundbreaking ceremony attended by all employees. Leading the groundbreaking was MCFA’s Vice President of Operations Jay Gusler and incoming President Ken Barina. MCFA expects to complete the project, located at 2121 West Sam Houston Parkway North in Houston in the third quarter of 2013.

“MCFA is excited about this expansion because it will allow us to offer our customers a product line built in Houston that covers all five classes of forklifts,” said Gusler. “In addition, we’ll be able to increase our production and assembly personnel, while contributing to the U.S. economy by engaging the services of local suppliers.”

The additional manufacturing space will allow for the increased production and assembly of all electric and internal combustion forklifts built in Houston. The growth also will support future production of the newly introduced Jungheinrich ECR 327/336 series of electric end rider pallet trucks in addition to other energy-efficient electric lift trucks in the future.