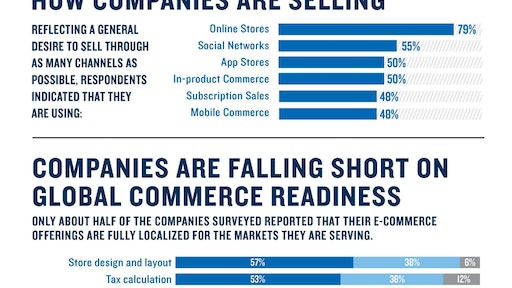 Ecommerce will increasingly shift to a multi-channel approach for commerce.

As market technology advancements continue to develop, a number of companies are taking a closer look at expanding their commerce initiatives.

According to a recent report from Digital River Inc., Minneapolis—conducted and compiled for Digital River by Vanson Bourne and which surveyed 250 decision makers from companies in the software, games and consumer electronics markets—ecommerce will increasingly shift to a multi-channel approach for commerce. Consistent with the shift to multi-channel online strategies, the survey indicated respondents are increasingly connecting with customers via multiple touch points. Nearly 80 percent of respondents said they were currently using transactional Websites, followed by social commerce (55 percent), app stores (50 percent), in-product commerce (50 percent), subscription sales (48 percent) and mobile commerce (48 percent).

“Companies are looking for more ways to connect directly with their customers and offer them more choices when it comes to purchasing online—whether that be mobile, social, in app, subscriptions or other options,” said Joel Ronning, Chief Executive Officer, Digital River. “The survey pointed out the need for companies to reassess their global commerce readiness. Local is the new global today. We were surprised to see how many companies are still not vested in a fully localized online strategy. The growing generation of customers shopping online and across borders wants to be greeted in their native dialect by a company that understands their local culture and norms. The ability to interact with the customer at this level, anytime and on any device is critically important to success in today’s online market.”

The survey asked companies about their commerce plans for expanding into new online channels and geographies, their biggest online challenges as well as their expectations for revenue growth in the next two years.

Over the next two years, 46 percent of survey respondents said they plan to expand their commerce strategies to include mobile commerce followed by app stores (40 percent), in-product commerce (38 percent) for gaming and software sectors only, subscriptions (36 percent), and social commerce (34 percent).

In the next two years, respondents expect nearly a third of their online revenue will continue to be generated from their online stores, with nearly 20 percent of revenue coming from the mobile channel—which is the channel they also said they are most likely to adopt in the next two years. Despite social commerce’s heavy use at the present time, respondents expect their mobile revenue will outpace their social revenue in two years’ time.

Yet while companies make plans to amp up their commerce initiatives, areas exist where companies selling into global online markets could do better and where customers stand to benefit from additional commerce investment or development efforts—including the area of global commerce readiness.

“We know from our experience working with thousands of companies on a global basis that  failing to localize store designs, languages, currencies and customer service can be substantial impediments to attracting and retaining customers through the online shopping and checkout processes,” said Ronning. “Companies everywhere are drawn to the promise of additional revenue, enhanced margins and new opportunities. What may not be so obvious—especially for companies that are expanding into new geographies for the first time—are the complexities that can waste money, cause delays and sometimes stop global initiatives dead in their tracks.”

Some of the lag in adopting global commerce best practices might be because—even more than 15 years into the commerce era—companies continue to view commerce as challenging.

“The survey echoed what we continue to hear from client companies of all sizes as they prepare to enter the global online marketplace,” said Ronning. “Building, managing and growing an online operation on a global basis is a costly, time intensive and complicated proposition.”

Survey respondents reported that tax and compliance issues seem to have the highest “degree of difficulty” when it comes to commerce, with 65 percent of respondents rating it as significantly challenging. More than half of the respondents also rated several other commerce areas as “significantly challenging,” with 59 percent noting customer support, followed by global payments (58 percent), marketing channels (57 percent), language (56 percent) and the localization of the online store (56 percent).

Nearly All Americans under 50 Are Buying Online