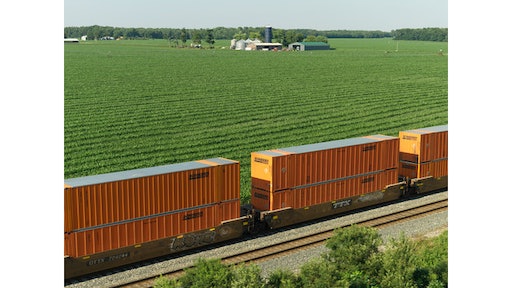 Class 1 railroads continue to set intermodal volume records while shoveling billions of dollars into new equipment, infrastructure and employees to handle growing projects, notes an article in the August Food Logistics. This year’s capex budget for BNSF is $5 billion—the highest ever and $1 billion more than last year. Some of that investment will accommodate growth in several key sectors, including intermodal and agricultural products.

Intermodal is the highest contributing segment of Union Pacific’s revenues, and in March, the railroad completed construction on its intermodal facility at Santa Teresa, N.M., which is strategically positioned to handle trade between the U.S. and Mexico.

The Port of Santa Teresa experienced a 13 percent increase in annual truck crossings between 2011 and 2013, and future expansion plans mean the port could eventually rank as the largest inland port in North America and a major gateway for an array of shipments from Mexico, including agricultural products, computers, auto parts and other manufactured goods.

Intermodal Finishes the Fourth Quarter Down