Overcome the Fork in the Road to Automation

The decision that will shape the future of your distribution center 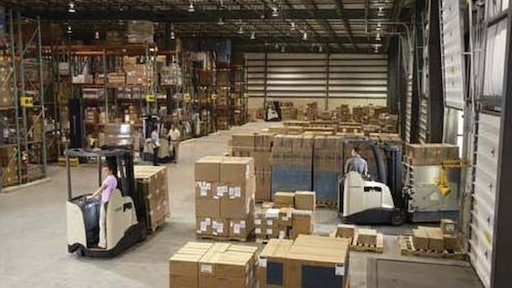 The ability of operators to adapt to their surroundings, navigate around each other and communicate with each other is difficult to duplicate with technology.

All roads lead to automation. At least that is one way to interpret the results of a 2012 Crown Equipment survey that asked more than 300 material handling professionals to identify the biggest challenges facing their organizations in the next five years. Of those challenges, more than 70 percent named reducing costs, followed by implementing new technology (35 percent), finding qualified labor (33 percent) and speeding product movement (22 percent).

Notice the theme? Each of the major challenges identified is related to automation. The question is not if automation will be adopted in the distribution center—but when and how. With all the attention automation currently gets, many supply chain professionals wonder if the answer to when is now.

Although warehouse automation has a number of components, for the purposes of this article I’ll focus on the automation of pallet-based processes, or forklift automation. This is an area that can have a major impact—either positive or negative—on warehouse operations. The decisions made on this technology can literally shape the future of your distribution centers. First, let’s look at the current state of the technology.

AGVs for the warehouse

Automatic guided vehicles (AGVs) have been used successfully in manufacturing but have yet to gain a significant foothold in warehousing and distribution. In 2011, they represented less than one percent of total forklift sales. Advances in technology, such as faster microprocessors and improved sensors, drive increased interest but adoption is not progressing as fast as many expected. Everyone is talking about automated vehicles, but few are actually using them. Why?

In manufacturing, AGVs typically transport materials from one manufacturing station to the next or from an assembly line to shipping, moving back and forth over the same well-defined path with no need to navigate around other vehicles. The tasks performed are predictable and repeatable and AGVs handle them well.

While some tasks in warehousing and distribution are similar to those which AGVs perform in manufacturing—such as moving full pallets to shipping—in general the processes that forklifts must support in warehousing are more complex and workloads are less predictable. Forklifts need to be able to go anywhere in the warehouse, often traveling to multiple locations to fulfill a single order while navigating around other vehicles and workers in the process.

This complexity mandates a much higher degree of vehicle intelligence and the use of more sophisticated guidance technology than AGVs in manufacturing employ. It also requires greater flexibility. A vehicle that can only travel one speed over a single path becomes a bottleneck during periods where workloads change significantly.

As a result, a new type of vehicle emerged that is distinguished by its ability to operate in both automatic and manual modes. This provides warehouse personnel with the ability to adapt to changes in processes or workloads by shifting vehicles from automatic to manual mode or vice-versa. Currently, these “dual-mode” vehicles are produced by retrofitting manual forklifts with automation technology. This represents an interim phase in the technology that will eventually be displaced by forklifts designed specifically for warehouse automation.

Moving toward an automated future

Based on current technology, it isn’t hard to envision a future in which automated vehicles handle the base workload of the warehouse, supplemented by operator-driven, dual-mode vehicles during peak periods or handling special tasks. In this future state, the two types of vehicles navigate around each other to perform the necessary tasks as efficiently as possible. Costs go down, warehouse workers are more productive and products move faster through the supply chain. But that vision is still in the future and attempting to achieve it with the current generation of technology can create issues that ultimately delay the realization of the long-term benefits.

Potential problems that may be encountered are within the areas of reliability, flexibility, scalability and safety.

Reliability—Retrofitting a manual forklift with automation technology can create several vulnerabilities that lead to vehicle downtime. Sensors that hang off the vehicle, rather than being protected by the body of the truck, are susceptible to damage when the vehicle is operated in manual mode because operators aren’t accustomed to the extra clearance required by the sensors. Extra electronics are also required to integrate the automation controls with the truck’s controls and automation controls may not be designed to the same reliability standards as the truck’s controls. Finally, issues may arise about who is responsible for addressing problems that occur—the truck manufacturer or the automation provider.

Flexibility—Dual-mode trucks address the need for greater flexibility in the warehouse but the current generation of guidance systems doesn’t provide the flexibility many facilities require. A current guidance system can’t, for example, navigate around other vehicles or congestion in auto mode and is limited in its ability to make decisions, such as choosing the best path to get from point A to point B. The system may perform well supporting operators in high-volume picking through operator-controlled remote advancement or transporting product from picking to shipping. But it is limited in its ability to support other tasks to achieve the future state described previously.

Scalability—Many of the same issues that limit flexibility also apply to scalability. Vehicles may perform acceptably in limited pilot applications but have difficulty—or require a much larger investment—to scale to the entire warehouse. The lifespan of the technology can also limit scalability. Automation technologies are getting better with each new generation but not all new technologies will be compatible with what exists today. For example, if you deploy laser guidance technology and the industry standardizes on a different guidance system, you may have to replace the entire system.

Safety—To meet industry safety standards, automated vehicles must be equipped with audible warnings and lights and have built-in sensors to detect obstructions. However, these systems are rudimentary compared to the many ways operators sense their environment and make decisions. An automated vehicle compensates for its deficiencies by moving at slow speeds and shutting down whenever any obstacle is perceived. Each time the vehicle shuts down warehouse personnel must remove the obstacle and manually restart the vehicle.

If not now, when?

Forklift automation technology is advancing rapidly and the vision of multiple automated vehicles moving efficiently around the warehouse to fulfill orders will be realized. It has the potential to transform warehousing in a meaningful way.

But this technology—and the service infrastructure supporting it—is still relatively immature. It is wise to move forward cautiously. Investments in the technology can pay dividends today if tasks are well-defined; vehicles can move easily between manual and automatic mode; and service responsibility is clarified.

There is risk in trying to do too much too soon, especially if an organization isn’t well-suited to deal with issues that typically accompany early adoption of emerging technologies. Implementing automated vehicles that sit idle more than they are operational because of service issues, or that require so much support there is little return on investment, can sour executive management on future investments. In that case, the best decision may be to map out a strategy but delay implementation until the technology matures.

The major developments in this maturation will be advances in positioning and tracking technology that expand the ability of automated vehicles to navigate the warehouse; the emergence of industry standards specific to automation; and the introduction of forklifts fully purpose-built for automation.

Stay tuned—the industry is moving forward aggressively on all fronts.