Global Trade Executives Optimistic about State of Economy in 2012 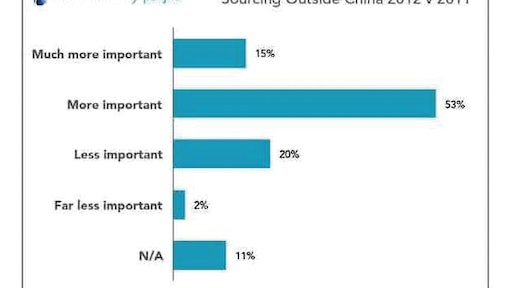 According to report survey respondents, sourcing beyond China has become more important over the past year.

The last four years have been uncertain ones for businesses engaged in trade as a result of the U.S. economic recession, the debt crisis hitting several countries in Europe and other similar crises across the world. But despite such economic downfalls, recent survey results find that nearly half of all American professionals involved in the trade industry are optimistic about the global economy in 2012.

According to “The State of Global Trade in 2012” report from global trade intelligence firm Panjiva, New York, N.Y., and The Global Sourcing Council, New York, N.Y., a non-profit organization that fosters dialog on critical issues in global sourcing and supply chain management, half of global trade professionals are optimistic about the global economy in 2012 and nearly three quarters plan to spend at or above 2011 levels.

Report findings—which include insight from 250-plus buyers and suppliers—support the U.S. Department of Commerce’s recent analysis which showed that Americans increased their spending by the most in seven months in February.

Yet, regardless of company size, three top concerns about the economy were a slump in global demand (31 percent); volatility in commodity prices (23 percent); and rising labor costs (18 percent).

“The past four years have been very volatile for those involved in global trade but there appears to be light at the end of the tunnel,” said Josh Green, Chief Executive Officer of Panjiva. “Sourcing professionals can deal with rising labor and commodity costs by making the move to regions where costs can be better controlled. The critical success factors remain identifying the right regions and partners to work with and putting the right planning processes in place to ultimately make the move.”

The report also finds that:

The report is based on a survey of over 250 professionals engaged in global trade conducted in February 2012.

Software and technology creators in the supply chain have tapped a range of new executives for growth.
Brielle Jaekel
September 18, 2020

The survey found that 81% of shoppers plan to do more holiday shopping online than in previous years.
Inmar
September 17, 2020

Long lines and extended dwell times lead not only to chaos but added cost. Fortunatel Industrial IoT and network technology is finally reaching a level of maturity to can bring data-driven visibility to increasingly complex yard and dock operations.
August 28, 2020

Brenton to Demonstrate its Product Line at PACK EXPO Connects

Brenton will be showcasing its expertise in end-of-line packaging and robotic integration in case packaging, palletizing and material handling with 12 virtual demonstrations during PACK EXPO Connects 2020, Nov. 9-13.
Brenton
September 14, 2020

The multi-purpose facility is being built on a 101-acre site inside the city limits of Fairfax, southwest of Cedar Rapids, and is scheduled to open in September 2021.
Travero
September 10, 2020

The company has been well established for many years in both countries through network partnerships and decided to open its own offices in each location to offer customers a full spectrum of multi-modal services.
CEVA Logistics
September 10, 2020

AutoGuide Reinvents Storage and Retrieval with a Flexible, Fast-Moving Alternative to Traditional ASRS