Constant communication and in-depth planning were required for the demanding preparation of such a highly specialized project. 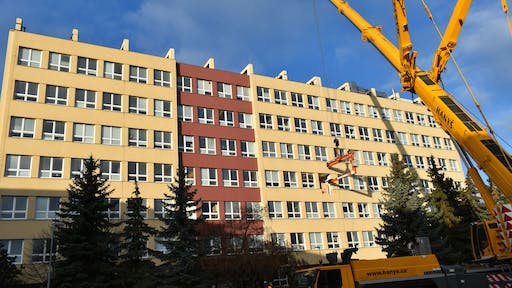 The J. Heyrovský Institute of Physical Chemistry is a science center of the Czech Academy of Sciences, located in Prague, Czech Republic. The research institution needed a freight forwarder who could be more than a vendor. It needed a global logistics partner that would care as much about the safety of its equipment as it did. It wanted a partner who could meet the specific end-to-end needs of shipping and delivering delicate scientific equipment provided by Argonne National Laboratory, a U.S. Department of Energy multidisciplinary science and engineering research center.

The EU scientific community watched as Gebrüder Weiss worked to fulfill this highly sensitive shipment from Lemont, Ill., to its destination in Prague.

In addition to finding a logistics provider that can be trusted to ensure the safe break down, shipping and assembly of highly specialized scientific equipment, the leaders at Heyrovský Institute sought a provider that would be collaborative.

“Our research field is highly collaborative internationally across the globe. Choosing a vendor with the same values is another way to ensure the success of a project. Gebrüder Weiss is a family company that thrives on collaboration. Its core values and reputation for high-quality, service provided reassurance for such a delicate and complex project,” says Dr. Stefan Vajda, ERA-chair holder and head of  the department of Nanocatalysis at the Heyrovský Institute.

The Gebrüder Weiss team worked hand in hand with Argonne and the Heyrovský Institute to map a custom logistics solution for the project. It started with a specialized Gebrüder Weiss team of workers picking up equipment and crating the pieces at Argonne. Then the 12.5 tons of equipment (used for sub-nano catalyst production and testing) was flown across the globe to the Heyrovsky Institute in Prague where it would need to be installed.

Constant communication and in-depth planning were required for the demanding preparation of such a highly specialized project. The team needed to account for changing dimensions of cargo once the equipment was disassembled and develop innovative delivery approaches to accommodate for the weight and size of the crates. The cargo was picked up at Argonne National Laboratory in Lemont and carefully packed for overseas transport via two direct flights from Chicago to Prague. After customs clearance, the next step was the partial removal of crates to deliver the cargo from the airport to consignee via an external warehouse. The final destination for the laboratory equipment was to the fourth floor of the Heyrovsky Institute.

One of the reasons this project caught the attention of the entire European scientific community was due to its high level of visibility, literally. With two of the crates weighing more than one ton each, a 350-ton crane with a 4.5-ton C-hook had to be used to hoist the equipment to the building’s fourth floor carefully. In addition to removing a window in the building, a portion of the exterior wall also had to be removed to make the opening large enough to accommodate the equipment. Onlookers gathered outside of the building during the street closure to photograph the crates as the remote-control operator carefully navigated the fragile shipment through the perfectly sized opening in the building, from a distance of half of a football field away. Once the crate made it safely into the laboratory, the team freed the equipment from the crate and placed it in its proper location. Then they began the lengthy process of reassembling the atomizer. The cargo arrived without damage, and the scientific equipment is back to work.

Companies across all industries are feeling pressure to reevaluate their supply chain vulnerabilities and strategies - and it’s not just the big companies that need to take action.
Castle Risk & HR Consulting
May 13, 2022

FourKite’s VP of Industry Strategy, 3PLs, Raj Patel and GM of network collaboration, Glenn Koepke both join the podcast to discuss winning SDCE’s Pros to Know award, their careers and an inside look at the software company.
FourKites
May 5, 2022

As the United States and much of the rest of world look to do what they can to stop Russia's attack on the Ukraine, following compliance for sanctions on Russia is vital for procurement companies.
Certa
May 4, 2022
Follow Us