A3 statistics showed robotics, machine vision, and motion control markets all contracted in the first half of 2020, compared to the same period in 2019. 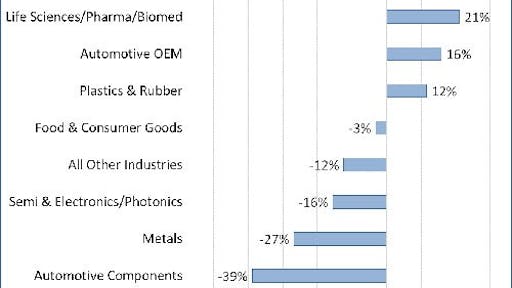 The Association for Advancing Automation (A3) and ITR Economics delivered a Global Economic and Automation Outlook, providing year-to-date updates and forecasts through 2021 based on recent market data reflecting the impact of COVID-19. A3 statistics showed robotics, machine vision, and motion control markets all contracted in the first half of 2020, compared to the same period in 2019.

“It’s clear that our industry is feeling the effects of COVID-19, its strain on supply chains, and the overall economic uncertainty due to our current circumstances,” said Alex Shikany, A3 Vice President, Membership & Business Intelligence. “Despite the numbers reflecting these recent challenges, our latest market surveys tell us that there is optimism for what the next six months will bring.”

“Despite the overall contractions, there were two notable industry bright spots in life sciences (+97%) and plastics & rubber (+49%),” Shikany said.

The North American machine vision market is also below one year ago levels, decreasing 8% in total to $1.3 billion.

Order revenue in motion control and motor markets totaled $1.669 billion in the first half of 2020, marking a 6% decrease from last year.

Survey data from A3 motion control and motor members revealed 49% expect moderate increases in the next six months, but only 6% expect significant growth. Motion control and motor respondents showed slightly less optimism on what the next two quarters will bring, with 32% expecting further declines. Only 13% believe the market will remain flat.

Beaulieu reported an encouraging seasonal rise this June-July in total US retail sales, noting the increase is the second best on record. Additionally, he discussed the beneficial surge in US disposable personal income, which he noted doesn’t happen in a recession.

The US stock prices index is showing a return climb to pre-pandemic levels, and the Housing Market Recovery Index is likewise showing positive input.

According to research, there will be an increased foreign demand in 2021 for US Exports in the robotics trade.