Universal Robots is making deployments for its partners simpler through kits made for applications on its UR+ platform that reduces recurring engineering decisions. 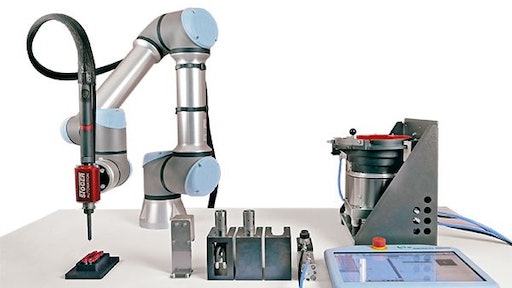 Twenty proven software and hardware kits for the most popular cobot applications are now available on the UR+ platform, the industry's ecosystem of products certified to integrate seamlessly with cobots from Universal Robots (UR). By reducing recurring engineering decisions for common apps, the ’Plug and Produce’ kits decrease project risk and complexity and are ready for fast implementation for tasks such as finishing, inspection, assembly, machine tending, material removal, dispensing and material handling.

“As the world’s leader in collaborative robots, Universal Robots is pleased to extend our award-winning UR+ ecosystem to include certified cobot applications,” says Jim Lawton, vice president of product and applications management at Universal Robots. “It’s a new arena where customers no longer have to select and specify cobot peripherals piecemeal, but instead get a kit with most of the needed components for their desired application. The results are faster deployment and faster payback.”

The expanded UR+ ecosystem now features two different categories; components and app kits. The kits are developed by UR+ partners with in-depth app knowledge that eliminate the duplication of engineering efforts when deploying widely used apps.

The new app kit category launching today on the UR+ platform features a total of 20 kits with many more to come. Some kits are globally available while others are available in specific regions or countries. The kits all come with “URCap” software that enables users to control all peripherals directly from the UR cobot’s own teach pendant in a rich 3D user interface.

An example is Robotiq’s Finishing Kits now compatible with over 20 pneumatic and electrical orbital tools from leading, worldwide brands. The kit allows manufacturers with polishing or sanding processes to utilize the kit’s built-in path generator to ensure consistent applied force in each cycle, increasing quality and productivity while reducing programming time from hours to minutes.