Results found that a more advanced data strategy was tied to improved outcomes. 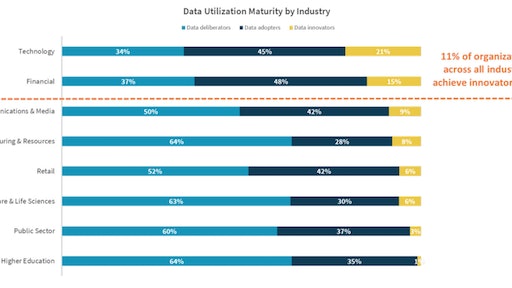 New research from Splunk Inc. explores the correlation between an organization’s use of data and its business success.

The global study, “What Is Your Data Really Worth?”, quantifies the economic impact and value of data across organizations. The study found that by making better use of data, leading organizations surveyed had materially increased revenue and reduced operational costs, boosting profitability by an average of 12.5% of their total gross profit.

The joint research study between Splunk and Enterprise Strategy Group (ESG) surveyed 1,350 senior business and IT decision-makers across eight industries in Australia, China, France, Germany, Japan, the UK and the United States. Results found that a more advanced data strategy was tied to improved outcomes, including revenue growth, operational cost reduction, increased innovation, faster time to market, higher customer satisfaction and retention and better, faster decision making across all industries in all countries.

In addition to analyzing how organizations are saving money and growing revenue with data, the study assessed respondents’ different stages of data-maturity based on criteria such as the prevalence of modern analytics tools and skill sets and the effectiveness of the organization at operationalizing its data.

·      Stage 1: Data Deliberator- Organizations that are in the early phase of their data strategy implementation.

·       Stage 2: Data Adopter- Organizations that are making good use of their data, but still have room for improvement.

·       Stage 3: Data Innovator- Organizations which place the strongest strategic emphasis on data and have an advanced strategy in place to extract business value.

The study found that an organization’s stage of data use impacts its ability to not only glean insights from its data, but to convert these insights into concrete, data-driven decision-making and real-time action. All organizations reported benefits from better data use, but Data Innovators achieved considerably higher key business and economic benefits.

Relative to the Data Deliberators surveyed, Data Innovators have added 83% more revenue to their topline and 66% more profit to their bottom line in the past 12 months. The study found Data Innovators to be more likely to have a data-obsessed company culture and employ AI technologies for data analysis by acting on their data more frequently.

In addition, the study found that 97% of Data Innovators meet or exceed their customer retention targets, with the majority (60%) having actually outstripped their goals. Meanwhile, 93% feel they tend to make better, faster decisions than competitors; while 91% believe that their organization is in a strong position to compete and succeed in its markets over the next few years. However, across industries and countries, less than 11% of organizations have reached the stage of Data Innovator, demonstrating that nearly 90% still have room for improvement.

“Until now, it has been difficult for business leaders to put hard numbers around the monetary value of data,” says Doug Merritt, president and CEO, Splunk. “This first-of-its-kind study proves that a holistic and sophisticated approach to data can help any organization become a Data Innovator, outpace their competition and become business and market leaders. Splunk is proud to help our 19,000-plus customers bring data to everything and re-imagine business outcomes with the data that’s already at their fingertips.”

The study quantifies the economic impact resulting from an organization’s better data use, with significant findings across eight major industries, including:

·       89% of financial firms agree that the intelligent use of data and analytics is increasingly becoming the only source of differentiation in the financial industry.

·       65% of technology firms have increased revenue through better use of their data assets.

·       60% of retail firms have increased revenue through better use of their data assets.

·       88% of healthcare and life sciences firms agree that advancements in data analysis and correlation of different data sets will have as big an impact on health outcomes as other medical advancements.

·       55% of manufacturing and resources firms have increased revenue through better use of their data assets.

·       93% of traditional communications and media companies agree that they must use data to reinvent their services or be disrupted by alternative entertainment offerings.

·       52% of public sector agencies have reduced their cost of operations through better use of their data assets.

The study also surfaced trends related to data use maturity by country:

·       56% of U.S. organizations have progressed beyond early stages of their data strategy, making the US the most data-mature region out of the seven countries included in the survey. U.S. firms report the highest average annual investment in analytics technologies as a percent of their overall tech spending.

·       German organizations are most likely to report having a “data-obsessed” company culture – collecting, integrating, and analyzing data is central to everything they do. For 41%, uncovering and better utilizing dark data is their top business priority over the next 24 months.

·       French respondents were most likely to report a lack of support for analytics initiatives among both senior leadership (30%) and general employees (36%). They were also most likely to believe that data and analytics can dramatically improve their IT operations outcomes.

·       Chinese respondents were the most likely (67%) to report having improved customer service and experience as a result of more effective data and analytics use. They also reported the highest reduction in fraud and/or waste as a result of better data use.

·       Although Japanese organizations are the most likely to use data and analytics for all executive decision support activities and processes, they spend the lowest relative share of their IT budget on data analytics initiatives.

·       Relative to other countries in the survey, Australian organizations have done the best job at reducing the volume dark data over the past 12 months, with 74% of respondents having reduced unknown and untapped data.

Businesses Get Leg Up on Buying Trends During Pandemic

Consumers are Intrigued by 5G, but Need More Than Just Speed