As the official delivery service sponsor of the NFL, FedEx ensured the safe and on-time delivery of the iconic Vince Lombardi Trophy on Saturday, Jan. 26, using its IoT monitoring device SenseAware. 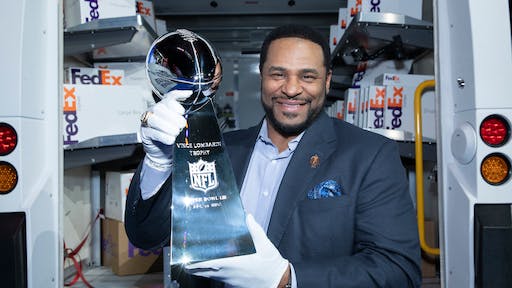 The professional football world is descending upon Atlanta in preparation for Super Bowl LIII, and one special piece of hardware has already arrived courtesy of FedEx.

As the official delivery service sponsor of the NFL, FedEx ensured the safe and on-time delivery of the iconic Vince Lombardi Trophy on Saturday, Jan. 26, using its IoT monitoring device SenseAware. SenseAware proactively tracked the trophy's journey from NFL Headquarters in New York to the Georgia World Congress Center where it is now on display. The device also tracked environmental factors such as temperature and humidity and monitored light detection, which would indicate if the package was opened before its arrival in Atlanta.

Kent Buchanan, an Atlanta-area resident and FedEx Express courier for 23 years, made the final delivery with the help of Jerome Bettis, Super Bowl XL Champion and Pro Football Hall of Famer.

"The Lombardi Trophy is one of the more than a billion shipments FedEx delivers each year, and on behalf of more than 450,000 team members around the world, we are honored to deliver the trophy to football fans for the 19th consecutive year," says Patrick Fitzgerald, senior vice president, Integrated Marketing and Communications, FedEx.

The historic trophy, which was handcrafted by artisans at Tiffany & Co., is made of sterling silver and depicts a regulation-size football in kicking position on a pyramid-like base that features the words ‘Vince Lombardi Trophy' and ‘Super Bowl LIII' along with the NFL shield.