We’re starting to see some fears subside as more autonomous mobile robots (AMRs) are rolled out across the supply chain and workers see that their purpose is to help, not replace, humans 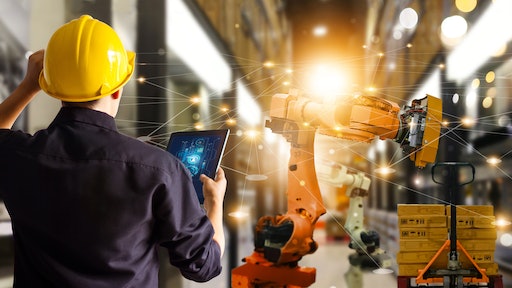 For years, we’ve been told that warehouse and factory workers fear being replaced by robots. And it’s clear some remain wary of automation and the impact it will have on people’s jobs. However, we’re starting to see some of these fears subside as more autonomous mobile robots (AMRs) are rolled out across the supply chain and workers see that their purpose is to help, not replace, humans. In fact, in Zebra’s latest global Warehouse Vision Study, many warehouse associates say they believe AMRs could make warehouse jobs less stressful, with over nine in 10 associates agreeing on some level that technology advancements in general will make the warehouse environment more attractive to workers like themselves.

Why the change of heart?

Nearly eight in 10 warehouse associates say walking fewer miles per day would make their jobs more enjoyable, even if they had to pick or handle more items. And since AMRs were built primarily to handle material movements, they are taking on the one task that workers have always wanted to offload.

Most associates (80%) who work alongside AMRs today confirm the dynamic mobile robots have helped reduce walking time. Associates also credit AMRs with helping to increase their productivity (80%), reduce the number of mistakes they make (73%), and facilitate advancement to new roles or opportunities (65%). In other words, most of their long-held fears about robots have been unfounded. Three-quarters of associates even agree today that they would feel safe working alongside AMRs, whether or not they have in the past.

I know this may all seem a bit contrary to mainstream media headlines. However, I have spent quite a bit of time on the shop floor with associates, as have my colleagues, and these hard workers repeatedly express how grateful they are for the guidance and assistance provided by AMRs.

But the truth is that it’s not just AMRs that are making a difference. It is everything that warehouse operators, manufacturers, 3PLs and distributors are doing to automate workflows and help augment the workforce.

Your employees appreciate how voice-assisted picking and wearables with augmented reality applications offer them step-by-step instructions for each assigned task. Even having real-time alerts when a truck is delayed, followed by a new task assignment to keep them productive, goes a long way to improving working conditions. That’s probably why 80% of associates feel positively impacted by labor shortages, even though logic would want us to believe that sentiment should be trending in the opposite direction. Nearly every warehouse operator has been compelled to implement new technology to solve business challenges that have come about since the start of the pandemic, and workers – like customers – are direct beneficiaries.

Technology has become both a game-changer and table stakes for those working hard to keep the supply chain running smoothly, even more so than higher wages, bonuses, or fringe benefits. And automation is quickly becoming the gold standard.

That’s because technology leads to more productive and flexible work shifts, especially technologies that automate workflows and information flows. I have heard from workers recently that, ever since AMRs and other technologies were deployed in their facilities, they have not had to go home as exhausted even though the operational tempo and order volume technically had not changed. Simple tasks are taking half the time they used to, while other tasks have come off their to-do lists completely and transitioned to an automation platform. They’re just getting so much more done in a day. One manufacturer reported a 70% rise in its workers’ productivity rate on the production floor after deploying AMRs.

It's not just the quantifiable improvements in working conditions or business outcomes that give value to automation, though, and that’s something supply chain leaders must recognize and accept if we’re going to turn things around.

Automation – whether robotics automation, industrial automation, or a software-automated workflow – makes it easier for people to be successful in their jobs, including those working both upstream and downstream of the automation solution. And success directly correlates to job satisfaction, which underpins retention and recruitment efforts as well as overall operational outcomes. Just consider how many warehouse associates say they are more likely to work for an employer that gives them modern devices to use for tasks versus an employer that provides older or no devices: 83%! What’s more, 84% of warehouse associates are raising the red flag saying they will not meet their business objectives unless more technology investments are made to improve operations.

We knew automation had its benefits. Yet, most predicted a longer-term growth trajectory for this type of technology. No one anticipated workers being the driver for automation, either. We thought workers would be a roadblock to the widespread adoption of such advanced technologies. Now, they’re clearing the way, even giving employers an ultimatum: “give us technology that augments our capabilities and increases our contributions, or we walk.”

I know that less than half of warehouse operators currently believe that implementing technologies such as robotics and devices can help attract and retain workers. Yet, workers have made it clear they need help meeting the expectations you and your customers have set forth, and they realize technology can provide that “help.” Some have come to understand this because they’ve experienced the changes that happen after mobile devices, wearables, AMRs and other automation-centric technologies are brought online. Others are still stuck trying to make do with pen and paper and feel “anything could be better than this”. That’s why you must listen to what your workers are telling you if you want to close the labor gap or, better yet, make it a nonissue. Don’t resist technology; embrace it as a change agent.

With so many people planning to make future employment decisions based on the type of technology available to them, it's also important to adjust return on investment (ROI) calculations for technology moving forward. Consider how it improves working conditions and attracts job candidates who are motivated to help you succeed – take both quantifiable metrics and “human” factors into account. At the end of the day, the true value of AMRs and other automation technologies is derived by how much they help bolster people’s productivity and efficiency – both of which influence throughput, capacity and customer satisfaction.

We need people to want to work in warehouse, manufacturing, distribution, and logistics roles. Without workers, automation doesn’t hold as much value. If it did, would warehouse operators be planning to simultaneously increase headcount and automation investments over the next few years? Probably not. Hiring plans would start to taper off as more automated systems come online. At the same time, without automation, the data shows workers don’t feel as valued.

Embrace people and robots as a package deal, rather than an either-or scenario, because that’s what workers want and your business needs now and in the future.

Given that supply chains tend to be seen as a cost center for modern business, some might argue that technology investments weren’t a priority for the supply chain prior to the pandemic.
Qlik
July 29, 2022

This case study dives into how Carhartt partnered with DHL Supply Chain to keep up with a quick consumer demand increase and drive speed to market.
DHL Supply Chain
July 28, 2022
Follow Us