Container terminal operators are faced with the dual challenges of weaker demand growth and rising costs. 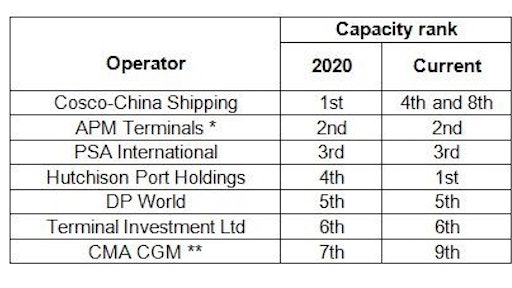 Global and international container terminal operators are faced with the dual challenges of weaker demand growth, and rising operating and capital costs due to larger vessels and alliances. On the stock markets, ports are increasingly seen as a mature value sector rather than a growth sector.

Global container port demand is forecast by Drewry to grow by less than 3 percent per annum over the next five years, with projections softened in particular due to the sharp slowdown in China’s exports. Positives are the resilience of the Middle East and southern Asia, and potential recovery of Russia (along with oil prices). In response, terminal operators and investors are urgently reviewing capacity expansion plans. Many projects within the five-year forecast horizon are already too far advanced to change significantly, but those scheduled to appear later in the period are subject to reconsideration in terms of timing and scale.

For terminal operators, the focus is switching from greenfield developments to merger-and-acquisition (M&A) activity, with a number of major deals already in the pipeline and more likely to come. APM Terminals acquired Grup TCB; CMA CGM bought APL; and Yilport is taking over Tertir. Three Chinese companies—China Merchants Port Holdings, Cosco and China Shipping (the latter two now merged) —have a strong appetite and significant activity in terms of expansion through buying existing businesses. By 2020, the combined Cosco-China Shipping entity will be the largest of Drewry’s global/international terminal operators (measured by capacity), albeit with a large proportion of this in one country (China).

Neil Davidson, Drewry’s senior analyst for ports and terminals, said, “It is clear that global and international terminal operators are fundamentally reviewing their strategies, becoming cooler on greenfield projects and more interested in M&A opportunities. A natural response to the increasing size of liner alliances is for terminal operators to look to consolidate terminal ownership in parallel.”

“However, a dichotomy in approaches is evident. On the one hand, many of the established international players have become more cautious because they are concerned that returns may be less than what they are used to. But on the other hand, there are several expansion-minded players like the Chinese operators and Yilport Holdings (a new entrant this year in Drewry’s league tables of global and international terminal operators) whose top strategic priority is to acquire more assets,” added Davidson.