On-time average is at its lowest since the West Coast labor dispute-affected February 2015 when it was 55.2 percent 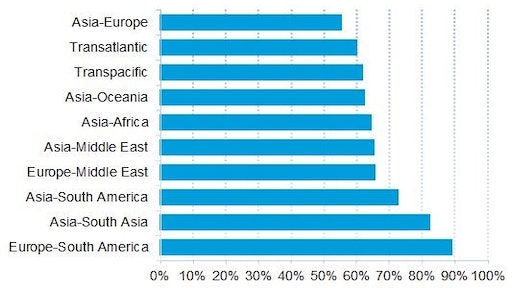 The on-time average has now fallen in each of the previous five months and is now at its lowest point since the U.S. West Coast labor dispute-affected February 2015 when the average was 55.2 percent.

On top of the worsening on-time average, the deviation from the expected time of arrival stretched out to 1.2 days in February, from 0.9 days in January.

Only two of the 10 trades covered were able to improve their on-time average in February vs. January; the Transatlantic trade got over the weather-affected issues from the start of the year to register a 19.6 point rise to 60.8 percent, putting it back close to its 2015 average, while the Europe-South America trade gained 4 points to 89.1 percent.

For the third straight month, the same carriers occupied the top three spots in February, although such was the overall deterioration that they didn’t require such high on-time averages to do so. Japanese carrier MOL finished on top yet again with an average on-time performance of 73.6 percent, well down on its leading score of 82.7 percent from January. Wan Hai took second place with 71.4 percent, down from 79.5 percent, while in third place, Maersk Line had an on-time average of 70.1 percent, down from 77.0 percent.

Only two carriers, MSC and Zim, made marginal improvements on their January performance, and the widespread malaise saw the spread from the most to least reliable carriers narrow to 18 points.

“A raft of missed sailings to coincide with Chinese New Year and the subsequent operational adjustments will have contributed to the weaker performance,” said Simon Heaney, senior manager of supply chain research at Drewry.

“Worryingly, it seems that reliability is indeed now on a prolonged downwards trend although the severity witnessed in February was probably exaggerated by the effects of Chinese New Year. We expect March to show a small month-on-month improvement, but for on-time averages over the coming months to remain below the series-high performances of the second half of 2015,” added Heaney.