Bad Start to 2016 for Liner Punctuality 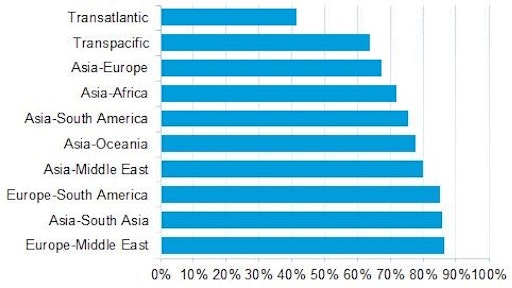 The latest result represented the worst month-on-month decline since January 2015 (when the on-time average fell by 9.4 points) and brought it down to its lowest reading since April 2015.

Nine of the 10 trades covered were less punctual in January, with the biggest decline seen in the transatlantic route (-17.9 points), which was no doubt affected by the heavy snow storms that struck the U.S. East Coast.

The three most reliable carriers for December 2015 retained the very same positions in January 2016 with Japanese carrier MOL once again taking the plaudits with an average on-time performance of 82.7 percent, down from 88.2 percent in December. Wan Hai followed in second place with 79.5 percent and Maersk Line took third spot with 77.0 percent. The spread between the most and least reliable carriers in January was about 30 points with Zim propping up the pack with an average of 57.2 percent.

“The latest reliability performance of carriers is disappointing considering the gains made in 2015. However, some of the deterioration can be explained by harsh weather, so it is too early to judge if this was just a blip or represents the start of a prolonged downwards trend,” said Simon Heaney, senior manager of supply chain research at Drewry.

“Drewry expects the February result to show some improvement, although the operational network changes designed to cater for the demand slowdown during Chinese New Year might have a negative impact,” added Heaney.