Although tensions are high between the United States and Russia, trade remains consistent 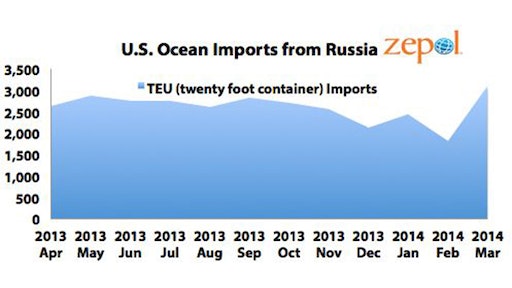 Minneapolis, Minn.—April 22, 2014—Zepol Corporation finds that, despite threats of trade sanctions by the United States, U.S. vessel imports from Russia remain steady. Twenty-foot container (TEUs) imports from Russia in March were actually up from February and totaled over 3,000 TEUs. So far in April, imports from Russia are still been consistent to the average volume of the past few months.

“Russia is the 18th largest nation that the U.S. imports from, and in 2013, Russian imports accounted for over $25 billion,” stated Zepol’s CEO and trade data expert, Paul Rasmussen. “Most of the imported products include oil and industrial supplies. These are not easily replaced imports and the risk of losing them must be taken into consideration as we go through this situation.”

Zepol’s data show that oil and petroleum products make up 65 percent of U.S. imports from Russia and nearly all of that is transported by ocean cargo. In February of 2014, the United States brought in over $1.2 billion worth of petroleum refinery products from Russia. As for exports, Russia purchased over $11 billion in U.S. goods in 2013, and the majority of that was aircraft engines and parts.

As for Ukraine, currently, the U.S. trades very little with the country, especially compared to Russia. In 2013, the United States imported slightly over $1 billion in Ukrainian goods, mainly comprised of steel products and fertilizers, but exported nearly $2 billion to the country, mostly coal products.