Signs of Life: Deal Activity in the Transportation and Logistics Sector Continues to Increase 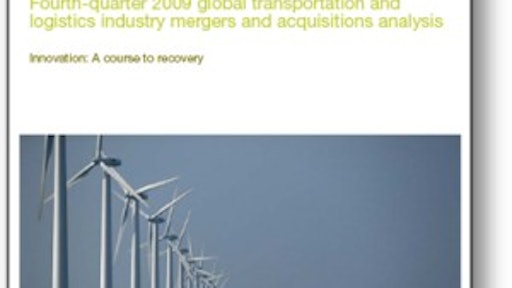 New York — February 22, 2010 — Deal volume and deal value in the transportation and logistics (T&L) sector continued on an upward trajectory in the fourth quarter of 2009 compared to the first three quarters of the year, suggesting that the industry — and the overall economy — are continuing to improve financially, according to a new report from consulting firm PricewaterhouseCoopers.

In its report, "Intersections: Fourth-quarter 2009 Global Transportation and Logistics Industry Mergers and Acquisitions Analysis," PwC notes that 33 deals with a total value of $48.5 billion were announced during the fourth quarter in the T&L sector, compared with 26 deals announced with a value of $8.1 billion in the third quarter of 2009.

The significant improvement in deal value is primarily attributable to one large transaction valued at $36.7 billion, however, even outside of this large deal, the sector still showed signs of marked improvement, according to the consultancy.

"We feel we really started to turn a corner in the transportation and logistics sector in the fourth quarter," said Kenneth Evans, U.S. transportation and logistics leader for PricewaterhouseCoopers. "Both deal volume and deal value are on the rise, and we're seeing signs of fewer distressed deals taking place, more involvement from financial investors and larger deals spotting the landscape."

The three largest deals in 2009 were announced during the fourth quarter, accounting for 87 percent of total deal value in the quarter. The increase of large deal activity also resulted in an improvement in average deal value for the quarter. The average value of deals announced during the fourth quarter was $1.5 billion, compared to $308 million for the third quarter of 2009.

Thanks to the large $36.7 billion dollar transaction, deal value in the fourth quarter is skewed sharply to rail deals. In 2008, rail deals accounted for 16 percent of total deal value but jumped to 59 percent for 2009. All other sectors saw a decrease in deal value as a percentage of the total. The next highest for 2009 is passenger air at 17 percent, primarily driven by two deals worth $5.4 billion combined.

Notwithstanding the resumption of large deals in the fourth quarter, most activity remains concentrated in smaller deals and those with undisclosed values. In upcoming quarters, the proportion of M&A activity attributable to larger deals will continue to improve as credit markets recover and rising stock markets provide strategic acquirers with the financing necessary to engage in larger deals.

"Financial investors have surpassed strategic investors in terms of deal activity," said Klaus-Dieter Ruske, global transportation and logistics leader for PricewaterhouseCoopers. "This suggests that the capital markets have recovered enough to encourage the financial investors to become more acquisition-focused. Interestingly, financial investors seem to be playing at either the low-end by participating in minority stakes or at the high end by being involved in two of the largest deals of the year."

The fourth quarter Intersections report takes a deeper look at innovation and its potential for stimulating an economic recovery in the transportation and logistics sector. As the economy recovers, companies hope to shrug off their "hunker down" mentality and find new ways to succeed. How well companies optimize acquisitions to achieve better penetration in existing markets and to succeed in new business environments will impact a company's pathway to recovery.

Among the short-term challenges facing the industry is the management of capacities. As the economy continues to struggle, many logistics service providers are working to find innovative solutions for balancing capacity with demand as demand also begins to recover. Winners will include companies that look inward to achieve the efficiencies necessary to cut and sustain costs, improve performance, and compete in an increasingly automated world, PwC writes.

Much of the impetus behind the transportation and logistics industry's interest in product development revolves around "smart equipment." In particular, the relationships among equipment, company, customer and supplier are becoming more and more digitized. Before long, transportation and logistics equipment suppliers will demand to see how their equipment operates when in flight or on the road, the consultants write.

Access to the full report, including the special section on innovation, is available (registration required) here.