The State of the Retail Supply Chain 2016 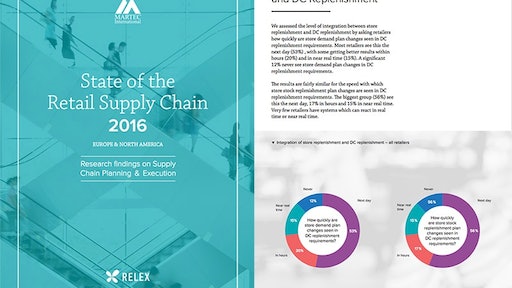 The new research asked retailers from North America, the United Kingdom (UK), Germany and the Nordics, with annual sales exceeding $110 million*, about the top issues affecting supply chain planning and execution, such as the challenges they face with forecasting, the visibility they have of their supply chain, whether they operate a single stock pool across all sales channels and how productive their staff are.

Some of the key findings for North American retailers include:

Mikko Kärkkäinen, group CEO of RELEX, commented: "For me, it is interesting to discover that whilst 64 percent of retailers globally highlighted forecasting for promotions as one of their main challenges, only 35 percent have a system in place that can build automatic demand forecasts for promotions and only 22 percent have a system that can manage promotion stock run to clear fixtures for the next promotion.”

The top issues regarding supply chain planning and execution for North American retailers are similar to the global average. However, the second largest issue is better collaboration with suppliers and these retailers have a higher priority than the average retailers in the other countries examined for the report. When questioned, some retailers mentioned that they worked on supply chain issues internally and feel that external supply chain improvements may be the most beneficial.

Visibility of the Supply Chain

Retailers in North America are more efficient than retailers in other countries surveyed for the report in terms of staff productivity. The average full-time equivalent employee forecasts and replenishes an average of just under $270 million of sales. This compares very favorably with the overall country average of just below $190 million of sales.

The likely reason for that finding in the report is caused by the larger average size of the North American retailers that were interviewed, which are able to realize greater economies of scale than in smaller countries. It’s easier to grow a big chain and achieve economies of scale in the United States simply because there are so many cities where a retailer can open a store.

Fran Riseley, deputy managing director at Martec International, commented: “This year's report provides valuable insight into how countries compare in terms of the issues and challenges supply chain executives face, and the visibility of their supply chains. Overall, it highlights that, for many, current systems, processes and technology are not effectively supporting supply chains. This is reflected by a high proportion (20 percent) of the retailers interviewed confirming that they have plans to replace or implement, for the first time, supply chain planning and execution systems.”

Kärkkäinen added, "The research makes clear that whilst there are some regional variations, overall, retailers globally share the same supply chain challenges. Updating systems and processes will prove key to addressing these issues in coming years.

"Worryingly, 26 percent of retailers also claim that they do not invest in new systems due to the perceived complexity of them, and 23 percent due to investment ties within existing enterprise resource planning (ERP) or in-house solutions that can offer no flexibility and can be complicated to improve.”

"Today’s advanced forecasting systems make it possible to manage several overlapping forecasts for different purposes. Additionally, software-as-a-service (SaaS) business models offer the flexibility needed to streamline implementation and have the ability to adapt to changing requirements during, or even after, the implementation—without additional coding. As a result, organizations rarely need help managing or configuring the system. When looking to replace or implement new supply chain planning and execution systems, it will be those that rethink their supply chain planning processes and lead their people through change that will be most successful."

*Statistics are based on 126 retailers of which 26 percent are North American. U.S. and Canadian retailers were interviewed with sales just over $343 billion, which is a 2 percent share of this market.