While it’s one thing for OPEX products to be American-made, company leaders say it's quite another to stay American-made in today’s economic climate. 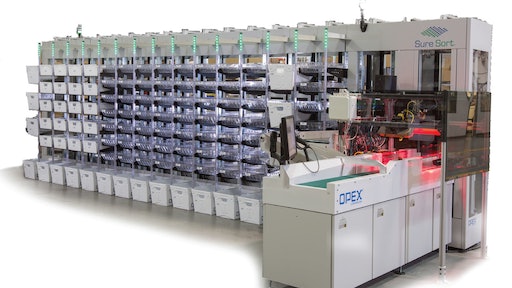 It was during the time you could tape a dime to a postcard and send it in, then get 12 albums,” says James Liebler, vice president of corporate and legal affairs for OPEX Corporation.

The time Liebler is referring to is the 1970s, when OPEX’s current chairman of the board, Al Stevens, was given the task of automating the mail processing system in Columbia Records’ Indiana mailroom.

Stevens came across an article in the The Wall Street Journal written about OPEX, which had just began manufacturing mail-opening equipment. “That intrigued him, as he immediately understood its enormous potential to change the industry,” Liebler explains.

Columbia Records bought two of the first systems (OPEX 4.0) for $50,000 each. The systems used a conveyor belt to feed open envelopes to operators seated at work stations.

Stevens eventually took a job as the sales manager at OPEX, and when the company later faced financial ruin, he and his wife Joanna mortgaged everything they owned and bought the company, turning OPEX into a successful enterprise that celebrated its 40th anniversary in 2015. His son David Stevens is the current president and CEO, while a second son, Mark Stevens, is the chief operating officer of this New Jersey-based, American-made mail processing and warehouse automation manufacturing company.

“As the industry evolved, we moved from handling mail to developing mail sorters and document scanners,” Liebler adds. He says that in 2012, the company became heavily involved in warehouse automation by utilizing technology OPEX had used in its mail processing systems and applying it to tasks such as inventory fulfillment and e-commerce.

He explains that while OPEX still manufactures a large variety of mail handling equipment, OPEX engineers have evolved that technology into several proprietary applications that specifically address needs that are unique to warehouse automation. “At our core, we’re all about looking at processes for handling things, to see how we can expedite those processes and eliminate unnecessary steps,” he says, “It’s the same core principle of looking at a process and paring it to the essential elements.” Though the technology has evolved, Liebler says OPEX is proud it didn’t become a “dinosaur” but instead developed individualized processing solutions that are streamlining workflows across the world.

Two new products were released at the recent ProMat 2017 material handling trade show in Chicago, the goods-to-person warehouse automation technology, Perfect Pick HD and Sure Sort, a new sorting technology that replaces antiquated put wall processes. Liebler says the products were received exceptionally well and the response to these new OPEX offerings was exciting. Perfect Pick HD provides twice the storage of the single Perfect Pick aisle, while the Sure Sort is a smaller item (under 5 lbs.) robotic sorting system that automates sorting at a rate of up to 3600 items per hour.

“We have blossomed into an international company,” agrees Dave Andrews, Facilities Manager for OPEX, who said the company now employees more than 400 people in its four New Jersey locations and has grown from its original 50,000-square-foot blueprint to a 500,000-square-foot one. It also has offices in the United Kingdom, France and Germany, employing international sales and service personnel. Andrews has been with OPEX for 22 years and says he feels privileged to be a part of the growth and innovation he has seen over the years.

While it’s one thing to be American-made, Liebler and Andrews agree it’s quite another to stay American-made in today’s economic climate.

“I think that’s a really important discussion and something we’re all proud of here,” says Andrews,

“While there are many options for overseas production of OPEX products, the company has made it a priority to provide local jobs as well as retain local control of manufacturing quality.”

“We prefer to use local vendors for both parts and raw materials,” he adds. “This helps to drive the economy in our own geographic area, and I think for all divisions, whether mail or warehouse, it also allows us to provide unsurpassed innovation and quality.”

Liebler concurs. He says Al Stevens knew from his own experience in managing a mail room of Columbia Records’ size that responsiveness of vendors, product reliability and the ability to offer targeted solutions was essential for business success. “His experience taught him that the best way to do that was to be as close to the customer as possible. By manufacturing here in the United States, we are able to very quickly respond to a customer’s needs and if they come to us with a question, to really understand what’s behind that question and then address a design need quickly,” according to Liebler.

Supporting the community where OPEX is headquartered extends to cultivating local talent and providing intensive training. “As a result, we develop highly qualified employees who choose to stay here,” Andrews explains. “I think we’ve worked really hard to provide an atmosphere that encourages growth.”

“We cultivate the talent we have right here in our own backyard,” adds Liebler, explaining that OPEX recruits from trade schools, junior colleges and large universities. It also offers apprenticeship and mentorship programs. “We take pride in the fact that we find Americans, employ Americans and train Americans,” he concludes, quickly adding: “That’s not to say we ignore the rest of the world. It’s just that when it comes to our manufacturing needs, we know we are best served staying local whenever possible.”

Andrews explains that the OPEX leadership team has long held the goals of sustainability and Net Zero Energy Building Certification for its facilities. Two Moorestown buildings currently hold this certification, a total of 250,000 square feet of space, operating solely on solar energy. The first system was installed in April 2012, and at the time, it was the largest installation statewide for a privately held manufacturing company. Another Net Zero facility is currently being renovated in nearby Pennsauken, New Jersey. When completed it will be an 180,000-square-foot OPEX production facility which will also be “net zero” solar-powered.

He says the Stevens’ family’s Christian faith guides many of the core principles and how the business is driven, especially in stewarding both employees and clients. “We see these things as a long-term investment and we take the long-term view of business,” says Andrews.

Stewardship is important to OPEX’s corporate objectives, from creating environmentally friendly facilities to investing in its employees and in communities in New Jersey and beyond. During Hurricane Katrina, many OPEX clients were affected by the storm, says Liebler. They were scrambling for new locations to operate and because of OPEX’s domestic base, the company was able to respond and support their needs. “That was a good example of how our local presence was able to make a difference quickly and also how we were able to be flexible in times of a natural disaster,” he says.

Andrews explains that OPEX understands its core areas of expertise and makes decisions with care.  Liebler says that a main rule OPEX follows is to not manufacture anything that is environmentally destructive or dangerous, such as PC boards.

“We subscribe to the idea that we’ve been given certain resources to take care of, to shepherd and be accountable for,” he adds. “That includes the environment around us and knowing we should not waste those resources. This all goes back to Al Stevens’ vision for what a company should be.”

Many manufacturing jobs have left the United States over the years and Liebler says the trend has been even more prevalent along the coasts, so it’s easy to feel like a lone wolf in New Jersey. “They decided to manufacture in America and remain an American manufacturer throughout the years,” adds Andrews, discussing the Stevens’ family. “Not only does this provide full-time job opportunities for hundreds of employees, it supports the local economy and allows us to provide a high-quality product we can proudly stand behind.”

Jen Bradely is a freelance writer who specializes in aviation, agriculture and supply chain topics. She is based in Fond du Lac, Wisconsin.