Congestion, cargo diversions and competition from Canada and Mexico are among the challenges. 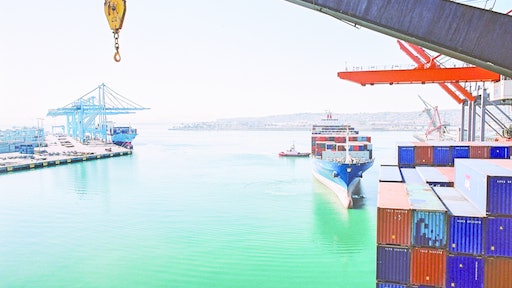 A new report from the U.S. Federal Maritime Commission (FMC) details some of the challenges facing U.S. West Coast ports, including increased competition from ports in Canada and Mexico for containerized cargo destined for the inland U.S.

If there is one consolation for U.S. West Coast ports, it’s that last year was, “anything but normal,” the report noted. The escalating friction between the International Longshore and Warehouse Union (ILWU) and the Pacific Maritime Association (PMA) following the expiration of their six-year labor contract on July 1, 2014 compounded existing congestion problems at major U.S. West Coast ports.

Carriers and shippers who were able to divert cargo away from the U.S. West Coast between late 2014 and early 2015 helped drive container volumes higher at competing ports in Canada and Mexico. Canada’s Port of Prince Rupert, for example, saw TEU traffic jump 14.3 percent in 2015 compared to 2014.

According to the report, “The Port of Prince Rupert poses as an attractive alternative for U.S. West Coast ports for U.S. inbound container traffic. In the years since Prince Rupert opened, the number of container lines offering services has increased from one to ten. The port currently receives four direct calls per week, including two by COSCO, one by Hanjin Shipping, and one by the 2M Alliance of Maersk Line and Mediterranean Shipping Co. Carriers with slot access include CMA CGM, “K” Line, Yang Ming, and Evergreen Line,” while Wan Hai Lines started taking slots this summer.

Contributing to Prince Rupert’s value proposition is its relationship with CN Railway, the FMC pointed out. CN offers an average of 14 train arrivals and 14 train departures per week, while the Port’s 12,000 feet of on-dock rail and 21 reach stackers help move containers quickly between vessels and the rail. The FMC stated that Prince Rupert holds a cost advantage over U.S. West Coast ports, which could be in the range of $250 to $400 per FEU to Chicago via rail.

CN is looking to capture even more freight coming into Canadian ports and destined for the U.S., added the report.

“The CN has teamed with the Port of Mobile, Alabama in an attempt to establish a ‘third coast’ gateway under the assumption that shippers burned during the congestion slowdown of 2015 will use Mobile to move imports into the U.S. Midwest. CN rail will be able to get to and from the Gulf Coast port in a period of 2 to 3 days. CN’s rail network cuts from busy Canadian ports on the west and east coast into Toronto, then into the U.S. via Chicago and Detroit, and on to Memphis, and then down to the Gulf of Mexico to Mobile.”

Although Prince Rupert’s rapid growth has pushed it to the threshold of its capacity, which is evidenced in a flattening out of container volumes, the question posed by the Northwest Seaport Alliance, according to the report, is what will happen when the Port completes development of additional berths and terminals? The answer appears to be that it will allow for continued erosion of U.S. market share.

Mexico also saw an uptick in container traffic due to cargo diversions from the U.S. West Coast, although it’s unclear how prominent a role the country’s ports will continue to play in shippers’ global supply chain strategy going forward.

However, the FMC report noted that despite this latest expansion, “there are troubling short term signs for cargo transiting to the U.S. destinations.”

Specifically, “Kansas City Southern rail operations from Lazaro Cardenas to points in the U.S. continues to experience growing pains and service reliability. Competition from the Panama Canal’s expanded locks will prove challenging by allowing carriers to offer all-water routes from Asia to U.S. Gulf Coast ports at rates which are competitive with rates on cargo moving through West Coast ports to points in the U.S. Gulf. In confirming the latter, Maersk recently announced it was replacing its Mexican intermodal route to Houston with an all-water service using 4,200-TEU ships.”

Meanwhile, it’s worth noting that along with ports in Canada and Mexico, U.S. East Coast ports, particularly those in Georgia, South Carolina and Miami, also benefited from the severe congestion along U.S. West Coast ports from 2014-15.

While the labor conflict between the ILWU and PMA contributed significantly to the cargo diversions from U.S. West Coast ports in 2014-15, there are underlying problems such as chronic congestion that must be addressed, emphasized the FMC report.

Chassis shortages are high on the list. The current ILWU-PMA agreement requires safety inspections of certain chassis by ILWU workers, which has the potential to cause serious delays. Moreover, container lines have transferred about 90 percent of their U.S. chassis business to leasing companies or other entities during the past several years, which is making it difficult for truckers to obtain a chassis because container lines are continuing to stipulate the use of a specific chassis leasing company in contract agreements.

The introduction of more mega container ships (18,000+ TEU capacity) is also adding to congestion, as ports must adjust in order to handle vessels of this size.

On a positive note, the report noted that: “The LA/LB port complex is in the middle of a 10-year, $7 billion investment plan to rebuild marine terminals, raise cranes to accommodate mega ships, densify terminal operations through automation, and expand intermodal rail access.”

Furthermore, in April, “The Northwest Seaport Alliance approved $141 million for terminal upgrades. Plans for the terminal include expansion and the installation of Super-Post-Panamax cranes at Husky Terminal and South Harbor.”

In addition, “The majority of shippers will likely revert back to U.S. West Coast ports despite the attractiveness of foreign ports if U.S. ports manage to automate, expand, and take steps to minimize congestion. They can do this through infrastructure improvements to better handle inbound cargo from mega ships, improved turn-around time for truckers, and quicker resolutions to labor disputes. This is certainly feasible, and if successful, U.S. West Coast will continue to see containerships return to port as trust, price, and risk mitigation allow.”

The completion of the Panama Canal expansion project this summer promises to have a measureable impact on containerized shipments from Asia to the U.S. now that larger vessels can transit the canal, providing an all-water route from Asia to the U.S. East Coast that was previously limited to the Suez Canal.

In a recent white paper from The Boston Consulting Group and C.H. Robinson, entitled, Wide Open: How the Panama Canal Expansion Is Redrawing the Logistics Map, it’s posited that East Coast ports stand to gain 10 percent additional share of container traffic from East Asia to the U.S.

While this gain for East Coast ports will not necessarily come at the expense of West Coast ports, because inbound container volumes overall will rise until 2020, “this shift of up to 10 percent will fundamentally alter supply chains,” according to the white paper.

“Notably, the battleground on which U.S. ports compete with one another for customers will likely expand and move several hundred miles west, toward Chicago and Memphis. It will take in other metropolitan areas, such as Detroit and Columbus, and encompass a newly contested region that accounts for more than 15 percent of U.S. GDP. In this area, shippers will often be able to route containers through East Coast ports to inland destinations at costs that are either lower or comparable to the costs that they would incur by using West Coast ports.”

However, as shippers start to examine their newfound options with the expanded Panama Canal, transit time, shipping costs, and considerations related to time to market and inventory levels are among those that must be studied carefully in order to determine the right port strategy for a particular commodity, and an overall supply chain strategy.

Meanwhile, the white paper added that three developments, in particular, would likely magnify the shift in volume through the Panama Canal to U.S. East Coast ports: