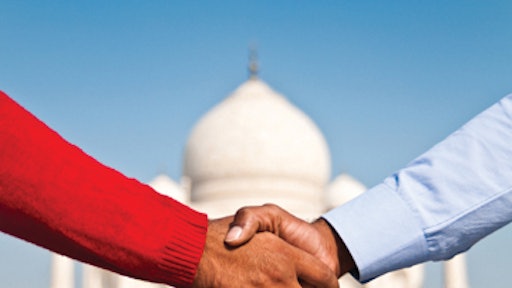 The numbers are staggering.

According to the International Monetary Fund, India is the world's 10th-largest economy by market exchange rates, at $1.53 trillion (U.S.), and the fourth-largest by purchasing power parity (PPP), at $4.06 trillion. With its average annual GDP growing at 5.8 percent for the past two decades and at 10.4 percent during 2010, India also is one of the fastest growing economies in the world.

Following market-based economic reforms in 1991, India has become one of the fastest growing major economies, and is considered a newly industrialized country. With 1,210,193,422 citizens reported in the 2011 provisional Census, India is the world's second most populous country. Its 467 million workers make it the world's second-largest labor force. The service sector makes up 54 percent of the GDP, the agricultural sector 28 percent, and the industrial sector 18 percent.

It makes for an intriguing and complex supply chain challenge. In a recent report, Optimizing the Supply Chain in India: Promise and Peril, Deloitte Consulting said, “The traditional methods of supply chain design and management do not always apply in the Indian context, owing to its complex tax regulations, non-standardized transportation, uncertainties across the value chain, and low rate of technology adoption.”

Authored by Darin Buelow, Raman Nath and Mohan Ram Akella, the report went on to say, “Designing an India supply chain catering to over a billion people, spread across several hundred cities and more than half-a-million villages is a formidable task in itself. Considering the regional variations, complex tax structure, infrastructure obstacles, rising customer expectations and the uncertainties involved, the use of scientific methods may seem infeasible. Yet, a scientific approach enabled by technology is a better, and may be the only, way to tackle a challenge of such magnitude.”

Technology is indeed beginning to slowly carve out improvements in the supply chain in India, says David Frenzel, VP Contract Global Logistics for APL Logistics. And 3PLs are playing a role.

“Warehousing, for example, traditionally is very manually focused,” he says. “Global standards are being adopted. Customers we have in India, including major multinationals, are moving from in-house operations to bring in best practices to manage their warehouses or are moving domestic space and labor to someone like us to bring in Warehouse Management Systems.

It can often take six to nine months just to get the necessary permits to open a warehouse in India, and the cost and number of permits varies by regions. The typical warehouse in the country also is much smaller than in other countries, often as small as 5,000 to 25,000 square feet.

“There are major global technology providers in TMS and WMS in India, with a number of local companies and local investments. They want to bring logistics to the next level in transportation, as well as warehousing.”

One of the problems, however, is lack of sufficient infrastructure, especially in the transportation area. “It’s a major complaint and concern. It’s real,” says Frenzel. “Roads, rails and ports are all a challenge to economic growth.”

How bad? The Deloitte report says, “ India has one of the worlds’ largest road networks, yet less than half of the roads are paved and only about 7,000 kilometers (4,349.6 miles) are four lane roads, significantly lower as compared to China’s over 34,000 kilometers (21,126.6 miles). These national highways account for less than 2 percent of the total road network, but carry 40 percent of traffic. As a result, despite spending more of its GDP on logistics than developed nations, India will still face logistics challenges for years to come.”

India spends approximately 13 percent of its GDP on logistics; only China and Thailand, and 3 percent more than the United States. The report goes on to say, “Though India spends a lower proportion of supply chain costs on transportation, the multiple stocking tiers in a typical Indian distribution system require higher costs be spent on inventory and warehousing. Where transportation costs in the U.S. are fairly evenly distributed between driver, fuel and equipment costs; fuel accounts for the maximum transportation cost in India.

APL’s Frenzel adds, “Lead time is long, especially on trucks. In some of the states, the speed averages 12 miles per hour on the roads. Unfortunately, you need more inventory in the networks and more sites than if you had better transportation options. There is also potential for damage to your goods on the roads.”

There are positive signs, he says. “The congestion is in the major metro areas and even across the network; it’s the size and quality of the roads, but there are improvements. There are investments in ports, highways, railroads. There is a positive story to be told.”

Rail is becoming an attractive alternative. “It can [result in] smoother, higher quality moves and is a real opportunity to avoid congestion,” Frenzel says. “It’s healthy to consider rail along with trucks in your mix.”

Again, 3PLs are playing a part. APL Logistics has begun what it calls IndiaLinx, its rail operations arm in the country. IndiaLinx is a joint venture between Neptune Orient Lines subsidiary APL Logistics and Hindustan Infrastructure Projects & Engineering, which, owns and operates 18 weekly rail services between India’s west coast ports and inland rail terminals. APL Logistics is offering double-stack container service in India and plans to expand its service as more rail corridors are approved for stack trains.

Following the government-owned Indian Railway's decision to allow double-stacking on the corridor, the first run involved the stacking of 90 40-food containers on a train from the Port of Mundra to an inland container rail terminal near Delhi, according to The Hindu Business Line. The government plans to provide a freight rail system with double-stack capacity between key ports and North Indian industrial centers by the end of 2016.

To revitalize the ports, Frenzel says, the Indian government plans major investments that will triple the country’s cargo handling capacity at 12 major ports, with the goal of being able to handle 3 billion tons per year by 2020.

India has a very complex taxing structure. Products are typically taxed twice, says the Deloitte report, once by the central government (Central Sales Tax) and then by the respective stage governments.

Help, however, is on the way. A long-debated and talked about solution is the Goods and Service Tax (GST), which was originally presented in 2009 and scheduled to take effect in April 2010, then in January of this year. The latest target date is April 1, 2012.

Its implementation will abolish a number of other taxes, including the Central Sales Tax, state-level sales tax, entry tax, stamp duty, telecom license fees, tax on consumption or sale of electricity, transportation of goods and more.

Estimates are that India will gain $15 billion a year by implementing the GST because it would promote exports, raise employment and boost growth, as well as dividing the tax burden equitably between manufacturing and services.

“The prospect of GST going into effect can be positive,” Frenzel explains. It’s based on logistics rather than tax factors and creates a uniform common market across India.”

SCN Summit | Data Collection: How to Read It and How to Act on It

Register
Industry experts provide a rundown of the different solutions available and why ERP, track-and-trace and other supply chain management software is crucial to the success of your business.

It's True; The Cannabis Industry is Here to Stay

According to a new a report from BDSA, the Cannabis industry is expected to hit beyond $62 million by the year 2026.
BDSA
September 22, 2021