Following a successful pilot trial period in five Northeastern states, Amazon has rolled out its new freight brokerage operation to all 48 contiguous states. 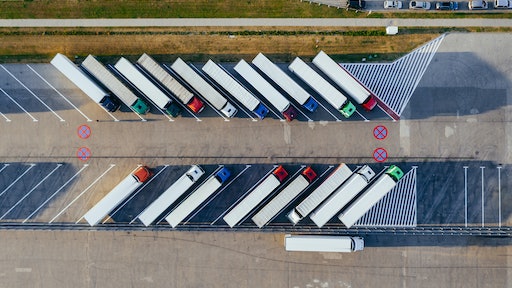 Following a successful pilot trial period in five Northeastern states, Amazon has rolled out its new freight brokerage operation to all 48 contiguous states—a move that will enable the e-commerce giant both to compete with other large digital brokerages and enhance its edge as a retailer during peak shipping season.

Kearney, whose company is a leading designer and manufacturer of virtual simulators for driver training, among other applications, notes that where last-mile transport refers to the delivery of goods from a fulfillment center to a customer or a retail store, middle-mile shipping is delivery from a point of origin—a factory, for example, or an airport or seaport—to a fulfillment center. Middle-mile transport is customarily provided by digital freight brokers, who connect shippers (individual companies or shipping carriers) with truck drivers—typically using programmed algorithms to match a given delivery with the location, schedule, and capabilities of a given trucker.(2)

While Amazon owns or leases thousands of truck trailers, it has traditionally relied on contractors or brokers to provide the tractors, the power units that house the driver and pull the load. In October of 2019, however, the company announced that it was purchasing heavy-duty tractors from Volvo (as well as possible other suppliers). Amazon’s long-term objective is said to be to gain more control over its supply chain, in which it is working aggressively not only on freight brokerage, but on airfreight service and last-mile parcel deliveries.

Meanwhile, Amazon’s core business, retail e-commerce, has seen explosive growth—driven in part by the COVID-19 pandemic—as U.S. daily e-commerce sales grew 49% in early April over the level of a month earlier. To keep up with demand during the novel coronavirus outbreak and beyond, Amazon has announced plans to hire 100,000 new employees, including drivers, for its warehouse and delivery operations in the U.S.

“And it’s not just Amazon,” Kearney says. “The combination of COVID-19 and an already existing trend toward e-commerce is creating an urgent—and ongoing—need for capable new workers. As leading providers of a technology that has demonstrated, repeatedly, the ability to produce better, safer drivers, we look forward to our continued collaboration with trucking companies, driving schools, shippers, and other players in this essential, thriving, and rapidly changing industry.”