Carriers and logistics companies look for alternative methods of shipping during the supply chain crisis. Are they just band aids or a path to a new, sustainable future? 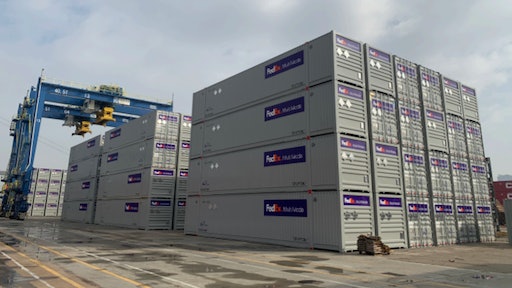 FedEx and Port of Hueneme, located in Southern California, released news that the former’s new congestion bypass service will begin at the port by the end of January. A new charter vessel, which is said to be one of three, left the Chinese port, Port of Humen, on Jan. 4 and has a capacity of 300 53-foot containers per sailing. The vessel is carrying electronics, automotive materials, garments and general merchandise.

The shipment from China is the first of FedEx’s new venture to get around backups in major ports like the Port of Los Angeles and the Port of Oakland. Instead of importing empty containers from China, FedEx now sells capacity in the containers. They will arrive in Port of Humen, which is north of the San Pedro Bay ports, which FedEx says will cut 20 days off transit time due to the bottlenecks in the southern ports.

It’s one of many new strategies that shippers and carriers are taking on to combat severe issues in the supply chain, hoping to keep it moving.

The Port of Boston recently rolled out new updates throughout the entire port, like many others right now, to ease supply chain bottlenecks. Its new makeover allowed it to receive the largest ship it that has ever been through the port, the Ever Fortune. The renovations cost a total of $850 million.

Numerous new warehousing and logistics facilities opened or broke ground recently as logistics providers look to expand operations to better solve these issues as well. Others expanded their most popular facilities to increase capacity, similar to the Port of Boston.

The Port of Long Beach, the source of many supply chain woes today due to its popularity and accessibility to major routes, has undergone numerous new policy and strategy changes to reduce its standstills like adding fines for those taking up too much time at the port. It’s sister port, the Port of Oakland, adopts many of the same and similar policies. However, the fee, originally planned on rolling out in early January, was pushed back to Jan. 21, as the ports saw a combined decline of 55% in aging cargo since the fee was announced in the fall.

Some policies that were announced before the supply chain crisis are now stalled to offset the challenges currently faced. For instance, the Port of Vancouver pauses its previously plan to prohibit the use of trucks older than 10 years to reduce hazardous emissions and greenhouse gas contribution. The project will likely roll out later one when bottlenecks have subsided.

But for the other measures these logistics companies undertake, will they be able to truly help the supply chain? Some of these measures are indeed a way to get the industry out of the significant hole its found itself in but as for a long-term future many experts remain undecided.

Technology developers in the supply chain flocked to creating new products that would create a smarter supply chain, with increased data coming directly from the assets themselves in an industry focused on the Internet of Things (IoT). But the usefulness of these innovations will rely completely on whether or not supply chain companies will invest in these technologies.

I welcome the innovation and new strategies surrounding the industry. Seeing the bottlenecks in the San Pedro ports come down is enough to give hope for the future.