The consumer demand for products is faster than ever, with retailers scrambling for new delivery solutions. Could drones be the answer? 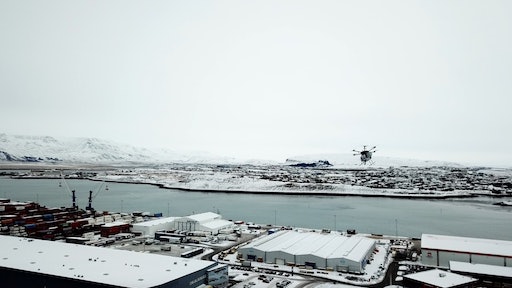 Flytrex has tested its drone control system with the Ukrainian Postal Service and a company delivering pharmaceuticals to hard-to-access locations in Africa. Its latest partner is AHA, an on-demand goods service in Reykjavik, Iceland.

Mounting consumer demand for instantaneous service has triggered a raging on-demand delivery war, with major retailers scrambling to meet appetites for ever-faster deliveries. Amazon’s acquisition of Whole Foods and Target’s purchase of Shipt are leading indicators of this trend, which dovetails into a larger movement toward instant services—from money transfers to prescription deliveries.

In a culture that prizes speed, retailers must develop the capacity to delivery products within a few hours of order placements to remain competitive in the marketplace. Even next-day delivery will soon no longer cut it. How are retailers to adapt to this new reality? The answer can be found in drones.

Moreover, drone technology is exceptionally advanced. In urban environments, drones can circumnavigate skyscrapers and operate in densely-developed areas without falling victim to the congestion and inefficiencies too often experienced on the roads.

To illustrate drones’ bottom-line benefit to retailers, the ERAU scholars presented the example of an online retailer that paid $2,000 for a delivery platform that could fly 50 hourly flights weekly, at an allocated cost of $1.74 per trip.

Compared to other methods costing $2.50 per last-mile trip, the drone delivery option generates cost savings of $0.76 per delivery—savings that quickly add up, particularly for retailers with high delivery volumes.

An instructive case study on the promise of drone deliveries can be found in Iceland, where Flytrex’s partnership with the e-commerce company AHA has reduced delivery costs by 60 percent, while slashing delivery times from 30 to only four minutes. The drone delivery system there has provided a game-changing solution to the difficulty of navigating Iceland’s often-forbidding terrain.

The Drone Era Is Here

Once confined to the realms of science fiction, the drone era is now truly upon us. The parent company of China’s biggest package carrier recently secured permission to begin drone deliveries, and drone deliveries are well underway in Africa, Europe and Australia.

Federal regulators in the United States are also moving to hasten the age of drone deliveries. State and local obstacles to drone carriers must still be overcome, but the fundamental logic of expanding drone delivery is undeniable. For retailers and consumers, drone innovation will prove a win-win.