How Will Brexit Affect the Supply Chain Industry’s Uptake of the Circular Economy?

With the UK’s departure day now provisionally extended due to Theresa May’s deal having been rejected three times by parliament, this raises doubts about the future of the circular economy for supply chains in the UK. 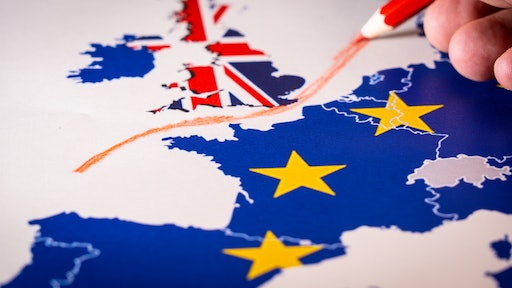 It is difficult to overestimate the role the European Union has played in the protection of the circular economy in the UK. They’ve created around 80 percent of the UK’s environmental laws[i], helping create targets for 50 percent of municipal waste to be reused or recycled by 2020 across Europe.

With the UK’s departure day now provisionally extended due to Theresa May’s deal having been rejected three times by parliament, this raises doubts about the future of the circular economy for supply chains in the UK. The EU’s latest Circular Economy Package (CEP) will not come into full effect until after the currently scheduled Exit Day and, dependent on the type of Brexit deal achieved, the UK may or may not be required to uphold its objectives.

Brief history of the circular economy in the UK

Recycling occupied a relatively minor space in UK society before the early 2000s. The shift towards a recycling society, both in terms of policy and culture, was prompted by the Waste Strategy 2000 and ensuing introduction of legislative recycling targets, both stemming from EU law.

In 2011 the Department for Environment, Food and Rural Affairs (Defra) published a Review of Waste Policy, proposing 13 measures for a zero-waste society which also mostly derived from EU regulations.

More recently progress has stalled; the rate of residential waste recycling in the UK fell to 43.7 percent between 2016 and 2017. As a result, the UK may now fall short of the EU’s 50 percent objective for 2020.

Legally binding regulations are therefore critical to the maintenance of the circular economy in the UK. The EU’s latest CEP, published in 2018, has set out ambitious targets such as all plastic packaging to be recyclable by 2030. Their Revised Legislative Framework on Waste demands that 70 percent of packaging waste must be recyclable by 2030 as well as 65 percent of urban waste by 2035.

Michael Gove, Environment Secretary, has pledged to enforce these targets after Brexit, however a quick delve into the UK’s recent interactions with EU environmental regulations casts this into doubt. Take for example the UK’s previous opposition to the EU’s 2035 urban waste strategy in March 2018 or initial resistance to the ban on bee-harming neonicotinoids in May 2018.

Without the threat of multimillion-euro fines from the EU, after Brexit the UK could easily fall short of their exacting environmental standards.

If May successfully passes her fourth attempt at a deal through parliament then the UK will leave the EU with a deal on the May 22. The future of the circular economy for the supply chain industry therefore depends on the type of deal May is able to achieve from the EU and finally pass.

Little legislative change would arise from the UK remaining within the European Economic Area (EEA), also known as ‘soft Brexit’. EU environmental laws would still be a legal requirement, as in the case of Norway who, for example, must respect recycling targets through the EEA. Most notably, the UK would no longer have a voice in the creation of new laws.

If the UK were to attain a bilateral agreement like Switzerland’s, certain EU environmental standards such as recycling rates would still have to be maintained. Current waste management laws may also be preserved to facilitate the large amounts of non-recyclable waste that the UK currently exports to Europe – although in a no-deal scenario this could become too costly.

In the above two cases, and obviously if the UK doesn’t leave Europe, the European Court of Justice (ECJ) would retain their ability to enforce legislation, including fines for missed targets. During the transition period which will last until December 31, 2020, this would be similar to a soft Brexit scenario where many EU environmental laws would be temporarily upheld and regulated, although this is still conditional on a withdrawal arrangement being agreed on by both the UK and EU.

If the UK is unable to reach a deal, known as ‘hard Brexit’, then this would permit the greatest divergence from environmental laws and consequently the supply chain industry’s uptake of the circular economy while the government occupies itself with the lengthy bureaucratic process of legislation creation.

Gove has promised an Office for Environmental Protection (OEP), a new statutory governmental body to act as an alternative to the ECJ. He insists it will “hold the powerful to account” and “embed protections for land, water, air and wildlife into policy-making as the UK leaves the EU”.

Yet, it has been estimated it won’t be ready until 2021[vi] and Greener UK, a coalition of 12 environmental groups including Greenpeace and WWF, believe it will leave the environment in poor shape:

“There is no commitment to give the proposed new watchdog power to initiate legal action, nor is there any commitment to enshrine vital environmental principles […] in law.”

With the Brexit departure day having already been pushed back twice, and May still unable to strike a deal between the EU and UK government, it remains very much to be seen what type of Brexit deal the UK will leave with, if any.

With a soft Brexit the UK would have to continue to uphold EU environmental legislations – but also be rendered voiceless in the creation of any new regulations.

In the case of a hard Brexit, although this could theoretically permit greater legislative innovation it seems highly likely that the UK would fall short of the EU’s targets. The lengthy process of law creation would lead to a weakening of regulations which could ultimately jeopardise the supply chain’s uptake of the circular economy in the coming years.

When asked what areas they have invested in over the last year, 57% of respondents said technology, 43% said sustainability and 40% said additional workforce.
Blue Yonder
May 24, 2022
Follow Us