Guest Column: Inside Track on the Prosperous Business of Active RFID 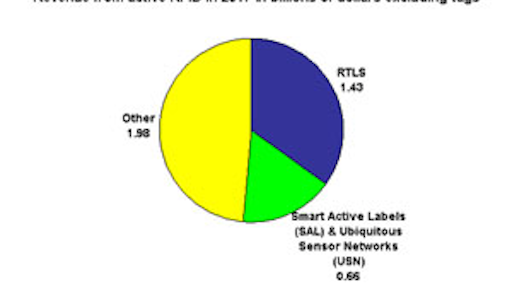 In January 2006, Aberdeen Group reported that, whereas only 8 percent of manufacturers had recently adopted active radio frequency identification (RFID), a remarkable 48 percent planned to adopt it. Most of those were jumping straight to active RFID without experience with passive RFID.

IDTechEx reported that the percentage of RFID expenditure related to active was about to rise from about 15 percent to 25 percent. A segmentation of the market in 2017 is shown in the illustration with this article.

Navis, Unisys and Savi Get Active

In item and conveyance tagging, Unisys recently landed an extension order from the U.S. Department of Defense worth $28 million yearly and up to $112 million if three further planned extensions are granted. The Unisys project uses active RFID technology to track 125,000 shipments every week including ammunition, rations, medical supplies, vehicles and vehicle parts.

The $425 million Savi Technologies order for military active RFID in 2006 has been followed other large military orders for active RFID landed by that company in 2007.

RTLS, a form of active RFID, have been installed in 100 hospitals in the last year. VDC forecasts 40 percent yearly growth in RTLS to 2010, and IDTechEx sees active RFID as a whole reaching $7.2 billion in 2017, partly due to a booming RTLS sector. Aeroscout, in RTLS, found it easy to raise $21 million in 2007 to fund its rapid expansion.

Because active RFID is now so important as a market and prosperous for participants, IDTechEx has a major stream on the subject at its conference "RFID Europe" in Cambridge, England, September18-19. Speakers from Savi Technologies USA, Telegesis and Ubisense in the U.K. (Zigbee and Ultra Wide Band versions of active RFID respectively) and Chipsensors of Ireland and Montalbano Technology of Italy (both using sensors) will describe the latest technologies and applications and what comes next.

In addition, IDTechEx is to hold a conference dedicated solely to "Active RFID and RTLS" in Dallas on December 5-6. For more information about the conferences, see the IDTechEx Web site.

About the Author: Dr. Peter Harrop is chairman of IDTechEx. He previously was chief executive of Mars Electronics, the $260 million electronics company, and chairman of Pinacl plc, the $100 million fiber optic company.

We Must Lead the Way: The Empowered Role of Procurement in a New Reality

Wherever the next best source of supply is, agile organizations can better adapt when disruption hits.
SAP Procurement
July 1, 2020

Study: Asset Tracking to be Used by 90M Businesses Globally in 2020

The report forecasts that China will lead the asset tracking market; generating $3 billion of spend in 2020.
Juniper Research Limited
June 18, 2020

The release features a broad array of innovations to empower customers to better manage their spend and suppliers.
Ivalua Inc.
June 18, 2020

Has Your Supply Chain Gone “Viral”?

One of the unintended consequences of having an international shortage of healthcare supplies is an increase in illicit commerce.
Ron Guido
June 18, 2020