As global trade recovers amid the vaccination rollout and easing of lockdown restrictions, the impact of Brexit will become more apparent and will continue to drag on the trade relationship. 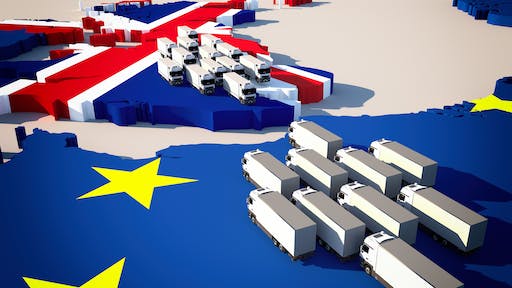 Trade in the United Kingdom is facing an unprecedented mix of challenges. The Coronavirus disease (COVID-19) health crisis and resulting lockdowns caused demand, both at home and abroad, to plummet. Health checks and travel restrictions caused border disruptions to further limit UK-EU trade while business disruptions contributed to volatility in data collection.

According to a recent economic research report from Atradius, UK international trade collapsed 14.3% year-over-year in March as the end of the transition period and imposition of a third national lockdown took their toll. Trade with the EU fell by a similar magnitude as trade with the rest of the world, but there is more to that story.

UK’s share of trade with EU continues to decline

The Trade and Cooperation Agreement (TCA) signed between the EU and UK in the final hours of 2020 offered some optimism for the 2021 outlook. Goods will continue to trade freely between the UK and EU, but non-tariff barriers in the form of customs bureaucracy and regulatory uncertainty remain disruptions.

UK trade is dropping at historically high rates, with exports performing the weakest, dropping 17.4% year-over-year, compared to the 11.8% drop in imports. Demand in the EU was severely affected by measures to combat the pandemic, but given the significantly higher magnitude of trade contraction, it also suggests that Brexit played a significant role. Total trade growth has begun to turn up from a low of -17.1% in January as base effects come into play and confidence improves.

In the first quarter of data since the free-trade agreement between the EU and UK was signed, the value of imports from outside the EU surpassed that of the EU, totaling 51.1% of UK imports.

Trade with EU affected significantly more than with non-EU states

Trade between the UK and EU has dropped to levels unseen since early 2016. As Brexit uncertainty increased and trade growth with the EU began to slow, trade with the rest of the world continued to grow.

The strong contraction under Brexit and COVID-19 is driven in nearly equal parts by the EU and the rest of the world. Of the 14.3% contraction in total UK trade in the last year, nearly half is due to trade with the EU alone. Considering this is nearly equal to the extra-EU trade to the decline, the pandemic’s effect on UK international trade is larger than that of Brexit right now. Moreover, the steepness of the drop in trade levels seen in the first months of 2021 is clearly larger with the EU.

When comparing the current level of UK trade with trade levels before sharp Brexit uncertainty and the pandemic, the industry experienced a significantly larger impact on overall trade with the EU than the rest of the world. This suggests there is more at play than solely pandemic disruptions. Comparing the past 12 months’ trade performance to 2018, UK-EU trade is 18.9% lower, while trade with non-EU countries is only 9.1% lower.

Brexit continues to challenge the future of UK-EU trade

Overall UK trade fell 16% in Q1 compared to Q4 of 2020. Trade with the EU, which covers almost half of total UK trade, fell by 22.4%, with sharp declines over its largest trade partners in the EU. Export sales are historically low and deteriorating. Retail and wholesale firms saw their exports drop 60%. It is evident that firms are grappling with higher expenses, such as supply chain delays in the manufacturing sector.

While the pandemic is masking the impact of Brexit, it is clear that the prolonged uncertainty surrounding the UK-EU relationship and the introduction of (non-tariff) barriers to trade are having a negative impact on the UK economy, especially on trade but also by deepening labor shortages. Trade with the EU in Q1 2021 fell more sharply than that of the rest of the world when comparing to Q4 2020.

Furthermore, comparing current trade levels to those before volatility surrounding either event shows a more substantial decline in trade with the EU than non-EU countries. While it’s too soon to determine the direct causal link, it is clear that challenges to trade between the EU and UK associated with Brexit are exacerbating the already weak trade environment wrought on by the global pandemic.

COVID-19 has been disastrous for international trade and Brexit has compounded the drop for UK-EU trade. As global trade recovers amid the vaccination rollout and easing of lockdown restrictions, the impact of Brexit will become more apparent and will continue to drag on the trade relationship.

3D printing can transform production and be an integral part of the supply chain that many manufacturers don’t realize yet.
Formlabs
December 20, 2021
Follow Us