ORBCOMM Inc. announced that MarineTraffic, a leading maritime information service, has extended their contract through the end of 2023. 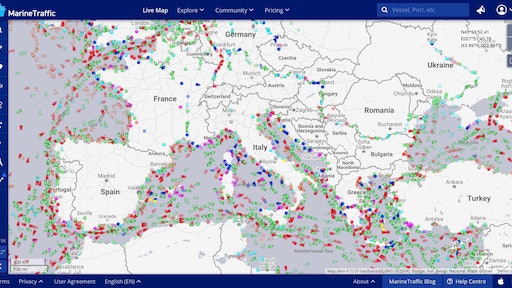 ORBCOMM Inc. announced that MarineTraffic, a leading maritime information service, has extended their contract through the end of 2023 for ORBCOMM’s satellite Automatic Identification System (AIS) data used for ship tracking and other maritime navigational and safety efforts.

MarineTraffic, which has been an ORBCOMM partner since 2013, uses ORBCOMM’s satellite AIS data to track real-time and historical movements of ships as well as their arrivals and departures in harbors and ports around the world. MarineTraffic combines ORBCOMM’s comprehensive AIS data with positional data from their extensive network of land-based receiving stations to provide actionable maritime intelligence solutions and improve the maritime ecosystem. By leveraging ORBCOMM’s reliable, high-performance AIS service, MarineTraffic helps their government and commercial customers enable maritime domain awareness, search and rescue, environmental monitoring and maritime intelligence applications. In addition, MarineTraffic will explore ORBCOMM’s other monitoring solutions as part of their efforts to expand their offering for the shipping industry and provide complete supply-chain visibility.

“We are excited to continue supporting MarineTraffic’s efforts to improve the overall maritime ecosystem by harnessing the power of ORBCOMM’s satellite AIS technology,” said Greg Flessate, ORBCOMM’s Senior Vice President and General Manager, Government and AIS. “As we collaborate on the next phase of our partnership, MarineTraffic will be able to leverage ORBCOMM’s industry-leading IoT solutions to enhance the end-to-end view of the global supply chain.”

“We are delighted to extend our long-standing relationship with ORBCOMM for another three years,” said Demitris Memos, MarineTraffic’s Chief Executive Officer. “MarineTraffic takes great pride in the collaboration with ORBCOMM and especially appreciates the reliability of ORBCOMM’s satellite AIS service, which is respected across the industry. We look forward to working with ORBCOMM as we continue to provide our global customers with digital maritime solutions that improve visibility, safety, compliance and operational efficiency at sea.”

ORBCOMM’s pioneering satellite AIS data service has provided the most comprehensive and reliable global coverage in the market over the last decade. ORBCOMM continues to advance its AIS business by enhancing its satellite AIS service with two new, next-generation AIS CubeSats, which are expected to expand coverage of ORBCOMM’s constellation, increase visibility to smaller Class B ships and extend its polar footprint with launches planned on separate missions within the next year. In addition, ORBCOMM is working with AAC Clyde Space and Saab to develop a next-generation, space-based VHF Data Exchange System (VDES) satellite, expected to launch in 2022, which will revolutionize maritime communications by providing more extensive global coverage, increased bandwidth and enhanced versatility.