As well as sending text messages, the microphone in the smart glasses can be used to send voice messages between the control room and workers. 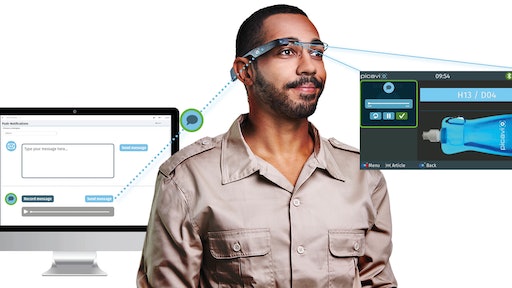 Picavi has expanded its smart glasses with a remote support function that uses push notifications. This allows important messages to be shared between workers and the control room during operations in both visual and audio form.

This remote support function enables contactless, bidirectional and individual communication in the warehouse. The system features two methods of communication, together with two priority levels. As well as sending text messages, the microphone in the smart glasses can be used to send voice messages between the control room and workers. The control room can also prioritize messages. Urgent messages immediately cover the whole screen with signal colors to draw the worker’s immediate attention. Less-urgent messages appear in the smart glasses as a banner. The picker can listen to them and process them either immediately or later on via the speakers in the smart glasses.

“The new function in our pick-by-vision ecosystem encourages consistent productivity while also allowing a whole new level of flexibility,” explains Carsten Funke, CSO at Picavi. “Push notifications make it easier for the control room to communicate with the workers, such as when prioritizing tasks. They also allow the picker to report problems in the warehouse to the control room immediately during operation.”