Walmart works on the launch of a drone delivery program through multi-site operations. 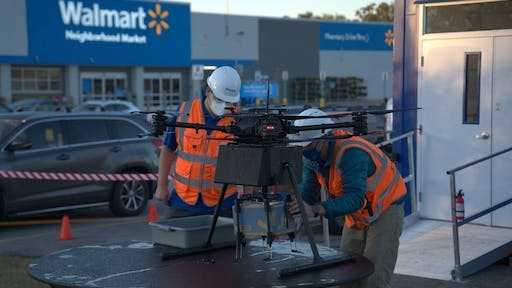 Drone delivery becomes one step closer to a reality for consumers, as Walmart launches a multi-site operation in Arkansas. The program will allow for same-day delivery within 30 minutes. Walmart partnered with DroneUp for the program, which consumers can use by shopping online at droneupdelivery.com. Walmart is also the first to use Twitter's new shoppable streaming feature with Jason Derulo. Many retailers are tapping modern and unique methods of operation today, reshaping supply chains and the retail industry. Walmart taking on these strategies gives them a leg up to be more mainstream.

L.I.N.K. | Panasonic Journeys into Drones in the Warehouse

FourKite’s VP of Industry Strategy, 3PLs, Raj Patel and GM of network collaboration, Glenn Koepke both join the podcast to discuss winning SDCE’s Pros to Know award, their careers and an inside look at the software company.
FourKites
May 5, 2022

Over 250 presenters will take stage early next year to address the most pressing issues across global logistics operations and supply chains.
Marina Mayer
April 28, 2022

Pros to Know: Improving Labor is Top of Mind for Supply Chain Tech

Barcoding Inc. client solutions VP Keri Corbin and a winner of SDCE’s Pros to Know award, gives an inside look at what it takes to innovate in technology for the supply chain.
Barcoding Inc.
April 28, 2022

Pros to Know: Next Generation of Touchless Invoice Processing is Here

This year, all eyes will continue to be on the supply chain and innovators will be pushing to create solutions that leverage technology and data to address persisting challenges.
CalAmp
April 21, 2022

Are Digital Twins the Solution to Improve Manufacturing Operations?

Pros to Know: The Supply Chain Space Can be Glamourous. Here's Why.

Jeff Gosz, COO for GAINSystems, details why the supply chain space can be both a fun and promising place to work.
Hannah Gooch
April 20, 2022

Volta seeks out fleet managers with a new product designed specifically for commercial fleets to switch to electrification. The strategic move is based on the sheer volume of commercial-owned vehicles and the need to electrify.
Volta
April 15, 2022

Digitization Creates Collaboration and Efficiency in Customs Clearance and Drayage

Digitization provides three key benefits – creating visibility of a shipment from port to warehouse, improving efficiency through reduced manual labor and errors, and reduced costs and fees for each shipment.
KlearNow
April 15, 2022

Automation can be particularly useful in helping organizations gain efficiencies and fill gaps when short staffed or up against supply constraints that impact productivity.
Labelmaster
April 14, 2022