Small business layoffs are expected over the next month, bringing payroll down from 82% to just 70% of pre-COVID levels. 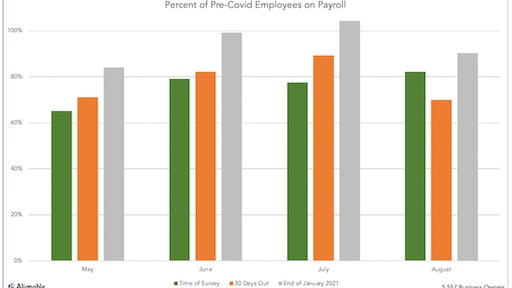 Alignable's September State Of Small Business Report has just been released. It's based on input from 510,000 small business owners polled since March and 5,500+ just last week. Several troubling trends are revealed, including that small business layoffs are expected over the next month, bringing payroll down from 82% to just 70% of pre-COVID levels. This is the first time since May that a decrease in hiring has been anticipated among our vast network of small business owners.

Beyond that, 46% of small business owners report earning less than 50% of the revenues they had prior to COVID. And the majority of retailers (66%) who usually plan for temporary holiday hiring now aren't sure whether they'll even need extra staffers. That's because 69% of Main Street shop owners believe Q4, 2020 will yield fewer sales than Q4, 2019. In fact, 33% of them expect to reap less half of their Q4, 2019 revenues this year. And that means more than one out of three Mom & Pop shops across the U.S. and Canada are in jeopardy of closing for good before New Year's Eve, unless consumer shopping habits change quickly.