The cost of operating cargo ships has fallen for two successive years, but is forecast to rise in 2017 and beyond. 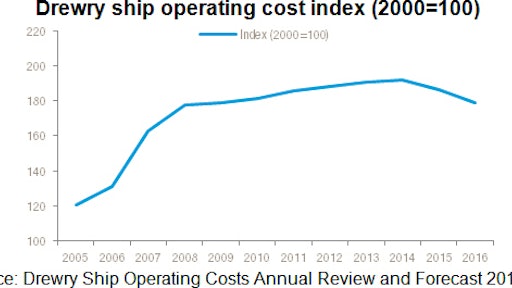 The cost of operating cargo ships has fallen for two successive years, but is forecast to rise in 2017 and beyond, according to the latest “Ship Operating Costs Annual Review and Forecast 2016/17” report published by global shipping consultancy Drewry.

2016 was another very difficult year for most ship owners and operators. Weak freight rates, declining asset values, eroded profitability and denuded cash balances have forced ship owners to reduce costs wherever possible, and vessel operating expenses have been no exception.

Drewry’s assessment of 2016 operating costs across 44 different ship types and sizes shows that ship owners have trimmed costs in 2016 for the second successive year. The average decline in total ship operating costs among the vessel categories covered was 4.4 percent. This comes after a fall of 1.5 percent in 2015.

“In the short term, it is evident that the direction of the wider cargo shipping market will continue to shape trends in operating costs. That said, the scope for further significant cost reductions is limited. We are still of the opinion that costs will rise in 2017 and beyond, but perhaps at lower levels than previously anticipated,” commented report editor Nikhil Jain at Drewry.

Drewry anticipates modest increases in manning costs as a result of international wage rate agreements and shortages in certain officer ranks. Excess capacity in the insurance sector and competition among insurance providers will help offset the impact of rising asset values on the hull and machinery insurance (H&M) market.

“Although the cargo-carrying fleet is relatively young, spending on R&M is expected to rise. Recent legislation regarding the retrofitting of ballast water management systems will lead to increased expenditure, so it is safe to assume that expenditure on repair and maintenance will rise at rates above typical inflation,” added Jain.