These robot couriers from Starship Technologies are seeking to crack the last-mile challenge. 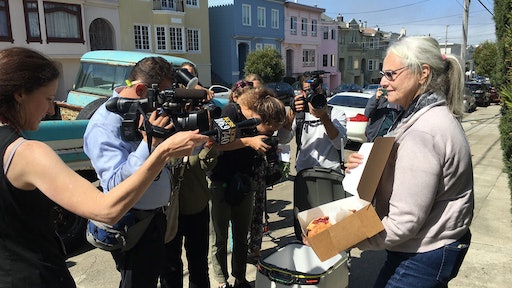 Resident Julie O’Keefe shows off the box of pastries one robot’s lid popped open to reveal for the crowd.

Making shooing gestures with his hands, Ahti Heinla, an engineer who helped start Skype, stood on Balboa Street in San Francisco. “Can you come out of the way for the robots?” he said to an assembled scrum of journalists. “They’re programmed to not crash into people.”

The crowd parted and two small six-wheeled robots trundled past them at a steady 4 miles per hour, lights flickering around their edges and on a protruding antenna. They glided down the Richmond District’s broad sidewalks, occasionally pausing and zigzagging when they encountered obstacles.

They pulled up outside a house on 20th Avenue. As the resident, Julie O’Keefe, came outside, one robot’s lid popped open revealing a box of pastries.

“I got a delivery from a little roaming cooler, it looks like,” she said delightedly.

Uber for Shipping Startup Roadie Picks Up $15 Million Investment from UPS, Others