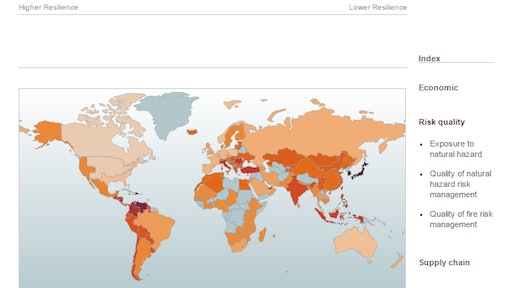 Johnston, RI—May 10, 2016—Supply chain resilience is vital to robust business performance. Threats to resilience—such as depressed oil prices, natural catastrophes and the spread of terrorism—are keeping financial executives around the world up at night.

These and other threats are reflected in the 2016 FM Global Resilience Index, a global ranking of countries’ business resilience to supply chain disruption. FM Global is a large commercial property insurer. The index ranks 130 countries and territories according to nine drivers that can affect the vulnerability of a business in those regions.

Declining oil prices are at the root of Norway’s drop to second place in the third annual release of the index. The oil producer was replaced by Switzerland, which was ranked second last year. Oil-rich Kuwait (ranked 59 this year, down from 50 last year) experienced one of the biggest declines, since its gross domestic product (GDP) was hit hard by lower oil prices. Economic productivity suffered similarly in Colombia, which fell from 110 to 119.

Crude oil prices, however, cut both ways. Armenia (ranked 52) and Malawi (ranked 84) are two of the biggest risers in the index this year, driven by an increased resilience to oil shock. Since their consumption of oil fell, the countries are less exposed to the dynamics of the oil market.

Political risk, one of the nine index drivers, can be a severe constraint on business resilience. A significant and topical component of political risk is terrorism. Already in 2016, there were deadly acts of terrorism in such countries as Pakistan (ranked 117), Belgium (ranked 17), Côte d’Ivoire (ranked 58), Nigeria (ranked 116) and Turkey (ranked 79). The threat of terrorism is real and unabated.

For the second consecutive year, Ukraine (ranked 125, down from 107) was among those countries with the biggest drop, reflecting the high degree of tension within the  as well as with Russia (ranked 75).

The so-called Brexit debate, over whether the United Kingdom (UK) (ranked 20) should leave the European Union (EU), could impact the country’s future ranking in the resilience index. For those wishing the UK to remain in the EU, a vote for the country to leave could represent a significant risk to the UK’s productivity and growth prospects. Should that result, the index drivers affected by GDP (i.e., GDP per capita and oil intensity) could be adversely swayed.

Why the Resilience Index?

Online and interactive, the 2016 FM Global Resilience Index aggregates data from authoritative sources and presents it in an easy-to-navigate dynamic tool. It helps executive decision-makers explore key supply chain risks that can harm their performance in order to better select suppliers, site facilities, evaluate established supply chains and identify customers who may be vulnerable.

“By giving executives easy access to authoritative information on factors that could disrupt their supply chains, the FM Global Resilience Index provides a simple way to analyze the potential for business risk and drive better decisions,” said Bret Ahnell, executive vice president at FM Global. “Resilient supply chains give businesses a distinct advantage by protecting their operational integrity, revenue stream, market share and shareholder value. A fragile supply chain, on the other hand, often harms the company involved, sometimes for the long term.”

The lowest ranked country in 2016 is Venezuela (ranked 130) for the second year in a row, followed in ascending order by the Dominican Republic, Kyrgyz Republic, Nicaragua, Mauritania, Ukraine, Egypt, Algeria, Jamaica and Honduras.

Venezuela’s position at the bottom of the index reflects its exposure to the twin natural hazards of wind and earthquake, perceptions of lack of control of corruption and poor infrastructure, as well as ill-perceived local supplier quality.

France (ranked 19) and the UK (ranked 20) retain their positions from last year, while Germany (ranked 4) rose by two places.

Three Regions of the United States

Users can go online and compare countries against one another by their rankings and scores year over year and by any driver. The index relies on vetted data from sources such as the International Monetary Fund, World Bank, World Economic Forum, as well as FM Global’s database of more than 100,000 insured locations.