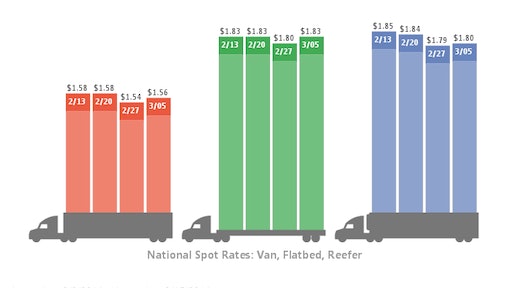 Portland—March 15, 2016—Spot market freight volume fell another 7.9 percent in February and truckload rates slipped, compared to January. The month-over-month decline was typical of seasonal norms, according to the DAT North American Freight Index, although disappointing harvests in California and Florida also contributed to this year’s lower volume. Freight volume typically rebounds in March, due to an influx of seasonal cargo, such as spring fruit and vegetables, construction equipment and materials, and a variety of consumer items.

Total rates paid by intermediaries to the carrier declined by 18 percent for vans, and 14 percent for both reefers and flatbeds, compared to February 2015, however, due to a 55 percent decline in the fuel surcharge, which comprises a portion of the rate. The surcharge is pegged to the retail cost of diesel fuel, which fell below $2.00 per gallon in February for the first time since 2004.

Intermediaries and carriers across North America listed more than 95 million loads and trucks on the DAT Network of load boards in 2015. As a result of this high volume, the DAT Freight Index is representative of the ups and downs in North American spot market freight movement.

Reference rates are the averages, by equipment type, of thousands of actual rate agreements between freight brokers and carriers, as recorded in DAT RateView. Rates are cited for line haul only, excluding fuel surcharges, except where noted. The monthly DAT North American Freight Index reflects spot market freight availability on the DAT Network of load boards in the United States and Canada. Beginning in January 2015, the DAT Index was rebased so that 100 on the index represents the average monthly volume in the year 2000. Additional trends and analysis are available at DAT Trendlines.