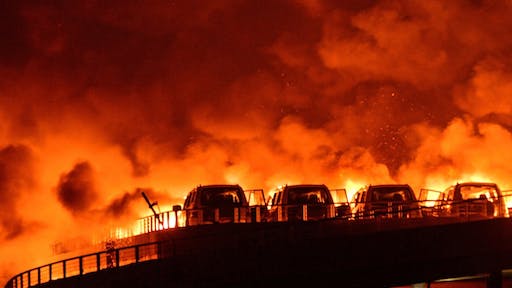 A parking lot of identical cars, all burnt to warped shells, gave the first indication of the widespread effects of the Tianjin explosion. Freight containers, flung from warehouses, lay mangled around the port. Buildings were reduced to rubble. Fires were still burning. People were missing and no one had answers. Chinese weibos were awash with theories, stories and accusations—most of which were deleted within minutes. Most analysts agreed that only time would tell the true cost of the explosions.

A month later, businesses and officials are starting to see that the impact of Tianjin stretches far beyond the 5-kilometer damage radius.

Current figures estimate 17,000 residences and 1,700 businesses were damaged in the blast. The immediate blast zone, about 2 kilometers in radius, is uninhabitable and contaminated with hazardous chemicals. In the past week, harmful levels of sodium cyanide were discovered in water surrounding the blast zone, though officials insisted that Tianjin’s water supply is clean and safe to use. The port is seeing delays and congestion that is affecting shipping routes worldwide.

Tianjin Port’s customs office was completely destroyed in the blast, which led to severe delays in the days immediately following the incident. Current estimates put 18,000 containers destroyed at the site, with an undisclosed number likely contaminated. That’s almost 100 million tons of inventory rendered destroyed or unusable. Official reports state that all container terminals at Tianjin are up and running, although large carriers sent out notices to clients warning them of likely delays in delivery for inventory running through Tianjin. Any containers carrying hazardous goods were banned from entering the port, leaving a handful of ships anchored at sea, waiting for redirection.

Cargo handlers, whose offices were destroyed in the blast, are struggling to resume operations. Rerouting is still difficult due to increased congestion. There remains a backlog in processing cancelled shipments and re-declaring cargo as companies try to understand which inventory was destroyed, meaning new shipments are being processed slowly. Essentially, while the fire is out and the rubble is being cleared, things are hardly back to normal in Tianjin. Countless buildings were destroyed, containing important products and information. That kind of damage doesn’t get cleared up overnight, and some companies are predicting several more months of delays in processing and shipping out products.

The automotive industry is estimating over $300 million in losses. Some companies, like Toyota, were heavily impacted, seeing inventory destroyed and operations halted. Toyota was forced to shut down its operations after one of its factories was damaged. The company will begin resuming its operations in Tianjin beginning in September, but will prioritize worker safety. Other companies reported thousands of new cars destroyed and announced plans to divert shipments away from Tianjin to ports like Shanghai, the world’s largest.

While the auto industry felt the most direct impact, other multinational corporations were forced to slow or halt production, causing subsequent delays in the following weeks. John Deere, Walmart and GlaxoSmithKline were among companies reporting redirected shipments and slowed production. Even companies whose factories were not damaged faced issues from bans on chemicals and congestion at the port.

Hazardous chemicals are common in the manufacturing components of consumer electronics. Tianjin, home to a growing hub of electronics manufacturers and chemical providers, is seeing a number of companies forced to reroute shipments or slow production as inventory of certain chemicals runs dry.

Chemical facilities in China are set to face tighter regulations, with about 1,000 chemical plants facing relocation away from populated areas or renovation for safer facilities. Because the plant where the explosion occurred was storing 70 times the permitted amount of sodium cyanide, officials in China promised to crack down on corruption among chemical companies. Expect tighter regulations and a longer process in trying to procure chemicals, including a possible increase in prices while levels of certain chemicals remain scarce.

Ports around the world will feel the impact of Tianjin, but West Coast ports will likely get the worst of it. Since labor strikes shut down Los Angeles and Long Beach ports earlier this year, the two major ports are slowly recovering and bringing back traffic. However, Tianjin is strongly connected to southern California ports. If exports from Tianjin slow down, then the West Coast will see much needed traffic slow as other Chinese ports continue to reroute to East Coast locations. Analysts are predicting a further drop in traffic over the coming months, due to Tianjin congestion.

Companies begin preparations early for the holiday shopping season, which starts with fall sales and reaches its peak Black Friday weekend. Disruptions at ports and delays in operations—particularly the manufacturing of popular electronics—could impact the routine buildup of inventory that businesses oversee prior to the holiday rush. The only thing supply chain managers can do is over-prepare and do it early: Develop contingency plans and make sure to understand where exactly your inventory is coming from. What products does your company have going through Tianjin’s port? Do you source any chemicals or electronic parts from the city? Work with your suppliers to ensure clear communication on what’s expected and what they can provide. Shipments coming out of China will increase as the holidays draw near—don’t get stuck as congestion gets worse. Make sure to work out shipments with suppliers and logistics operators now.

Only time will tell the true cost of the Tianjin disaster—but it’s time your company doesn’t have. It’s better to be over-prepared than caught with a shortage of inventory as the holiday season hits.