Southwest ToyotaLift installed an integrated security camera system to mitigate theft at one of its material handling equipment dealer facilities. 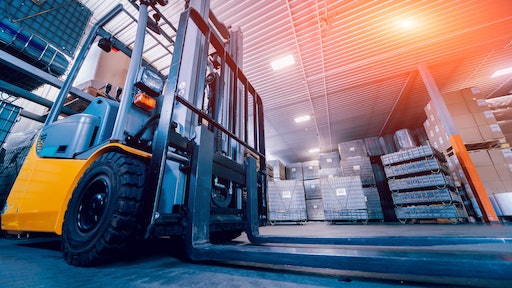 Heavy equipment theft of everything from forklifts, skid steers and trucks to bulldozers, backhoes, excavators and wheel loaders can be a serious issue for business owners, whether at the rental yard or jobsite. Stealing batteries, catalytic converters and entire vehicles can be a relatively low-risk, high-reward opportunity for thieves unless sufficient security equipment and procedures are in place. Equipment damage plus cut locks, cables and fencing can also cost businesses thousands of dollars to repair.

However, deterring opportunistic or premeditated larceny can be difficult with an unplanned, piecemeal approach, utilizing systems that are ineffective against theft.

Fortunately for rental, construction or material handling companies with heavy equipment, fully integrating the latest capabilities of physical security and access control systems can significantly cut theft and drive down the cost of deterrence.

This “virtual” approach combines video surveillance, access control and information technology (IT) integration to replace many of the functions of in-person security personnel, dramatically reducing costs. Virtual systems can be customized to a variety of loss prevention situations no matter the size of the operation or type of assets that need to be protected.

Southwest ToyotaLift is a family owned and operated material handling equipment dealer with four locations in California and Nevada. About a year ago, the dealer bought a new facility to add to its capacity. However, according to Barry Westenhaver, operations manager of the new facility, the site's location made it susceptible to theft from break-ins.

“We are freeway accessible and have a 600-foot yard along the freeway with equipment in full view. The yard is next to a neighborhood on the other side where people can climb a wall, and this led to a real problem with break-in theft,” says Westenhaver.

In fact, such an incident occurred about every three months at the peak. Westenhaver says that some opportunistic crimes occurred when people came off the streets during the night to steal car-type batteries. The next morning, the facility’s staff would arrive to find that the fence by the freeway had been cut open, and forklifts were torn apart with components missing.

However, even more troubling were sophisticated thieves who planned and staged the theft.

“[These thieves] knew what they wanted to take, what to use and how to do it. They would use a forklift or truck to break through our fences or armed gates, and were on and off our property so quickly that no one had time to respond,” says Westenhaver.

The police would usually arrive in about 10 minutes, but “because of the way the theft was staged, we almost never caught anyone. We would see them on camera, but there was not enough detail on the cameras we had at the time,” according to Westenhaver.

Although the ToyotaLift location kept adding security features in a patchwork fashion, nothing seemed to stop the theft problem. It even considered utilizing electric fences, but decided against them due to the potential liability.

“We had a security alarm system from a well-known company. We added security cameras but did not link the cameras. We installed a $50,000 fence along the freeway, and within a week, thieves cut through the fence with a power saw and stole equipment anyway. Regardless of what type of security we used, we had trouble, so we were looking for a new system,” Westenhaver says.

Where traditional security systems can inundate staff with mind-numbing nuisance alerts, many of which go ignored, the goal of the fully integrated virtual approach used by the technology convergence provider is to vigorously and promptly protect valuable rental, construction and material handling company assets from theft without unnecessary staffing, excess equipment or complexity.

In terms of video surveillance, that means instantly spotting any anomalies and escalating only those that need attention. It means preventatively notifying staff of any movement that needs further attention. When building access is included, it can also mean spotting any discrepancies indoor or gate access control, based on time of day, location, personnel involved and other factors. It means “slicing and dicing” a host of variables specific to the business that must be considered and drawing the attention of security personnel or managers when it is time to act and not when it is too late.

“What really caught my attention was that when the new camera technology sensed motion, it notified the security tech remotely monitoring the cameras that someone was on-site. This enabled the tech to immediately talk with either the police or the offender [via a microphone and loudspeaker system],” says Westenhaver. “We saw a real-life video of that in action and were impressed by all the different means to deter theft.”

In the video, the police were notified of a theft in progress at their auto yard. When the police arrived with canine support, the dog caught one suspect, while another hid. As police backup arrived, a remote technician monitoring the camera system located the hiding suspect behind a car and alerted police via yard loudspeakers.

“Calling out to a suspect over loudspeakers can deter theft before it starts. Or, in the case of a serious break-in that you have on video, calling the police immediately is better,” says Westenhaver.

Southwest ToyotaLift purchased the integrated security camera system, installed it at its new facility and pays a modest monthly fee to the technology convergence provider for equipment maintenance and camera monitoring.

Westenhaver prefers this remote monitoring arrangement rather than the more costly traditional option of paying onsite personnel to monitor security cameras, which the material handling equipment dealer had tried in the past.

“When we pay [the technology convergence provider] for remote monitoring, they only focus on our cameras when the devices sense motion, so one person can cost effectively monitor many properties just like he or she is on-site. So, it is not necessary to watch all the cameras all the time, [which can waste resources],” he says.

In another example, burglars were already inside the yard attempting to steal equipment.

“When the [provider’s] security technician called out to the thieves via loudspeakers, two started running immediately. One dropped his wrenches where he stood and ran. Both left the property, and we did not lose any equipment,” Westenhaver adds.

“Because the cameras sense motion, a remote technician can follow suspects throughout the yard wherever they go, tracking from one camera to the next. The camera focus can also be adjusted to the height of a person to prevent dog [or small animal] movement from triggering a notification,” Westenhaver adds. “The integrated surveillance technology is a step above anything we have seen. So far it has resolved our theft and break-in issues where nothing else would work.”

The loading dock is an influential piece of every company transporting goods to consumers, distributors or end users that connects the inside workings of a facility to the outside world.
Kirk Key Interlock
April 4, 2022

Lighting the Way to a Secure, Productive Warehouse

LED lighting can help create the secure and productive workspaces employees demand, while laying the foundation for the warehouse of the future.
Signify
December 9, 2021

From signs at every aisle and labels on each pallet and rack, there are endless ways in a warehouse to make a mistake or create a bottleneck. That’s why it’s important for operators to capture efficiencies whenever they can.
Peak Technologies, Inc.
November 4, 2021

We rely on the global supply chain to provide for us, but now it is time to do our part so we can prevent further disruptions.
Mackenna Moralez
August 11, 2021