Labor Abuse Set to Spiral over Next Two Decades

Unless governments take early measures to prevent automation, drastic job losses in South East Asia are predicted to produce a spike in slavery and labor abuses in global supply chains. 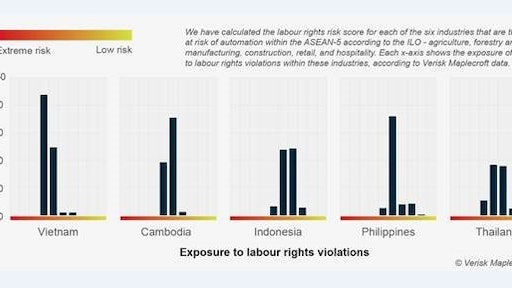 The figure above shows the degree to which workers in the ASEAN-5, whose roles are at high risk of automation, are already exposed to labour rights violations.

Unless governments take early measures to prevent automation, drastic job losses in South East Asia are predicted to produce a spike in slavery and labor abuses in global supply chains due to the onset of robot manufacturing, according to a new report by Verisk Maplecroft.

According to the Human Rights Outlook, automation ranks at the top of five issues that are presenting challenges to the reputations, operations and supply chains of multinational companies.

The UN's International Labor Organization (ILO) estimates that over the next two decades 56 percent of workers in the manufacturing hubs of Cambodia, Indonesia, Thailand, Phillippines and Vietnam will lose their jobs due to automation. The report says that risk of slavery and trafficking in supply chains will spiral.

These countries are particularly at risk due to the dependence of the workforce on low-skilled jobs and existing high levels of labor rights violations. Verisk Maplecroft already rates the countries as 'high risk', but their rankings and scores are forecast to deteriorate when the full impact of automation is felt.

According to the report, South East Asia's manufacturing hubs will not be alone in facing the challenges posed by automation, it also singles out the region due to its importance to the global supply chains of multinational companies operating in the consumer goods, retail, hospitality and ICT sectors.

“Displaced workers without the skills to adapt or the cushion of social security will have to compete for a diminishing supply of low-paid, low-skilled work in what will likely be an increasingly exploitative environment,” says Verisk Maplecroft’s Head of Human Rights, Dr Alexandra Channer. “Without concrete measures from governments to adapt and educate future generations to function alongside machines, it could be a race to the bottom for many workers.”

While investigating how automation will impact supply chain workers, Verisk Maplecroft applied its industry-specific labor risk indices to the ILO data across 21 sectors where jobs are at a high risk of replacement by automation.  The industires where risk the highest were identified as agriculture, forestry and fishing, manufacturing, construction, retail and hospitality.

The report notes that Vietnam is at the highest risk of the five countries studied. Nearly 67 percent of workers will seek alternative livelihoods in an environment where the risk of exploitation is already high.

Given the baseline of exploitation across the ASEAN-5, the report concludes that the risk of slavery and trafficking will rise significantly.

Women will also be affected once automation takes full force. Currently, the textile and footwear (GTF) industry employs 59 percent of all manufacturing workers in Cambodia and 39 percent in Vietnam. Any job displacement from this sector will have an impact on the entire manufacturing workforce, the majority of whom are women.

In both Vietnam and Cambodia, over 85 percent of GTF jobs are at risk of automation, with over 76 percent of these jobs are held by women. With fewer women in work, these countries will struggle to achieve their UN Sustainable Development Goals on gender equality.

“The adoption of automation technologies by companies will be gradual, but the unintended consequences for millions of workers in brand supply chains is likely to be severe,” continues Channer. “Responsible sourcing departments, in particular, need to identify and understand the adverse effects of automation on human rights, and work with civil society and governments to mitigate the impacts within their own supply chains.”