These ports face the greatest financial risk from natural disasters due to vulnerable locations and increasing cargo volumes. 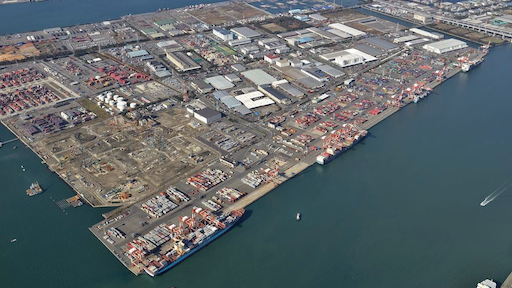 The Tobishima Pier Container Terminals at the Port of Nagoya. Nagoya leads all ports with a potential $2.3 billion cost to insurers from a one-in-500-year event because of the threat from earthquakes and windstorms, according to risk-modeling firm RMS Inc.

Ports in Japan, China and the U.S. face the greatest financial risk from natural disasters because of their vulnerable locations and increasing cargo volumes, a risk management firm said.

Nagoya, Japan leads all ports with a potential $2.3 billion cost to insurers from a one-in-500-year event because of the threat from earthquakes and windstorms, RMS Inc., a risk-modeling firm, said in a statement. Guangzhou, China is second at $2 billion, the company said, citing the possibility of wind-related losses, and the dangers involving petroleum products and autos. RMS said satellite images and analysis of cargo types and storage methods helped modernize risk assessments.

“Outdated techniques and incomplete data have obscured many high-risk locations,” Chris Folkman, director of product management at RMS, said in the statement. “The industry needs to cease its guessing game when determining catastrophe risk and port accumulations.”

The report was released a year after the Tianjin port explosion in China, a man-made disaster that led to more than $3 billion in claims after damaging property, disrupting supply chains and killing more than 170 people. RMS’s analysis, which also considers the amount of time cargo stays in port, found that the increased use of standardized shipping containers increased the amount of goods exposed to damage. Ships and ports have grown bigger to accommodate the containers.

Your Suppliers’ Risk Is Your Risk