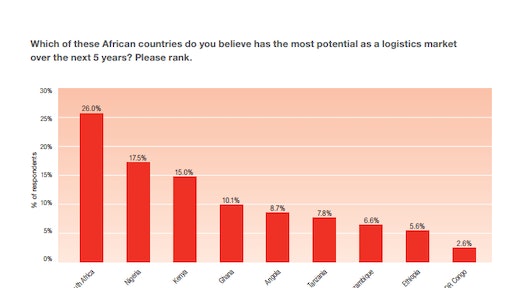 Despite recent growth and surging foreign investment, Sub-Saharan Africa remains a challenging frontier for many. Only 21.2 percent of logistics industry executives surveyed said their companies have operations there. Another 12.7 percent said they are in the planning stages to enter African markets. More than 43 percent said they have no plans to set up in Africa.

Baar, Switzerland—Jan. 18, 2016—Consumer spending by a fast-growing middle class is as important a growth driver for Africa as mineral and resource demand, according to a new survey of global logistics executives.

In the survey, which is part of the 2016 Agility Emerging Markets Logistics Index, industry executives rank South Africa, Nigeria, Kenya and Ghana as the most promising markets in Sub-Saharan Africa. Poor infrastructure, lack of power generation and corruption continue to pose the most risk to African economies, according to the more than 1,100 executives responding to the survey.

Despite recent growth and surging foreign investment, Sub-Saharan Africa remains a challenging frontier for many. Only 21.2 percent of logistics industry executives surveyed said their companies have operations there. Another 12.7 percent said they are in the planning stages to enter African markets. More than 43 percent said they have no plans to set up in Africa.

“The results show a serious disconnect between the perception of the market and actual opportunities. These are some of the world’s fastest-growing economies. Africa’s requirement for logistics services and supply chain expertise is huge and growing every day. At the same time, many of the companies that need logistics to enter the market don’t know how to get started in Africa or aren’t willing to take the risk,” said Geoffrey White, CEO of Agility Africa. “The market is open for first movers who can navigate risk and nurture African talent. The opportunity is for those seeking to build long-term, sustainable businesses that bring world-class practices and adapt to local conditions.”

The Agility Emerging Markets Logistics Index, now in its seventh year, offers a snapshot of logistics industry sentiment, and ranks the world’s 45 leading emerging markets based on their size, business conditions, infrastructure and other factors that make them attractive to logistics providers, freight forwarders, shipping lines, air cargo carriers and distributors.

China, the world’s second-largest economy, remains the leading emerging market by a large margin. Among the countries at the top of the index rankings this year, United Arab Emirates (UAE) (No. 2), India (3) and Malaysia (4) leaped over the commodity-dependent economies of Saudi Arabia (5), Brazil (6) and Indonesia (7). Rounding out the top 10 are Mexico (8), Russia (9) and Turkey (10).

The leading markets in Sub-Saharan Africa are South Africa (No. 16) and Nigeria (17). South Africa has Africa’s most advanced logistics industry and transport infrastructure, but its economy was hobbled by chronic power shortages, slumping commodity prices, a plunging currency and labor unrest.

Nigeria climbed 10 spots in the 2016 index, tying Egypt (No. 22) for the biggest gain by any country in the seven years since the index was first published. Nigeria’s enormous potential is becoming clearer since its recent decision to update the methods by which it collects economic data. Even so, its economy is heavily reliant on oil and was hurt by low energy prices.

The UAE, home to the powerhouse economies of Dubai and Abu Dhabi, has the best business climate and the best connectedness, a measure of infrastructure and transport connections, of any emerging market. As a result, UAE ranks as the world’s No. 2 emerging market after China, even though China’s economy is 25 times larger, India’s is five times larger, and Brazil’s is six times larger.

The UAE, Malaysia, China and Chile lead in connectivity, meaning they have the best infrastructure and transport links, along with the most efficient customs and border administration.

Nigeria’s size and growth suggest that it should rank near Brazil (No. 6) or Mexico (8) in the overall index. But Nigeria is no more business-friendly than Venezuela and Uganda, and its weak infrastructure, transport links and customs regime puts it with Bangladesh, Ethiopia and Tanzania in connectivity.

Among countries in Sub-Saharan Africa, South Africa has the best connectivity. In North Africa, Morocco has the best business climate and connections.

Countries in Latin America are losing ground to other emerging markets as a result of recession and political turmoil in Brazil, the region’s biggest economy, and depressed prices for commodity exports. Of the 10 countries that slipped furthest in the index, six are in Latin America: Peru, Argentina, Uruguay, Brazil, Colombia and Venezuela. Even so, Chile continues to be the top-ranked emerging market with a gross domestic product (GDP) under $300 million.

Russia, hurt by Western sanctions, and isolated economically since it began backing rebels in Ukraine and intervened militarily in Syria, fell from No. 7 to No. 9 in the index. Tension with Russia and the loss of economic output in the breakaway Crimea region hurt Ukraine, as well.

Ukraine fell four spots to No. 34.

Industry executives view oil prices and China’s economy as the leading risks to the global economy in 2016. Both represent potential threats for some Sub-Saharan economies. Mozambique, Uganda, Tanzania and others want to exploit huge new energy finds, but are hamstrung by low prices. China, the leading buyer for African minerals and other key commodities, is going to buy less as its economy slows.

Logistics executives see economic shock as the top risk in the Asia-Pacific, a sign of concern that a slowdown in China could ripple through economies and supply chains elsewhere in the region. A significant percentage (38 percent) said they are reassessing their China strategies. In the past, industry executives said natural disasters and corruption were the top risks in Asia.

The logistics industry is intrigued by the possibility that Iran could emerge from its long economic isolation as the result of an agreement to curtail its nuclear program. In the survey, Iran moved up 12 spots—from No. 27 to No. 15—among countries with potential as major logistics markets.

“It was a volatile year for emerging markets and you see that in the index. Eight of the top 10 emerging markets shifted places,” said Essa Al-Saleh, president and CEO of Agility Global Integrated Logistics. “Despite the turbulence, the fundamentals driving growth remain consistent—a rising middle class with spending power, progress in poverty reduction, growing populations. That’s why we are still positive on the outlook for emerging markets and see them driving global growth.”

Transport Intelligence (Ti), a leading analysis and research firm for the logistics industry, compiled the index. John Manners-Bell, chief executive of Ti, said: “The world’s economy is still riven by instability and emerging markets, such as China and Brazil, have not been immune. However, others, such as Mexico, are in a far stronger position, and will benefit from the economic growth experienced in the U.S. and Europe. More than ever, investors in emerging markets need to be discerning, and the results of our index are critical to providing clarity in a confusing and complex world.”