With financial backing from their joint U.S. parent company Teradyne, Mobile Industrial Robots (MiR) and Universal Robots (UR) have acquired a 50,000 m2 building site in Odense. 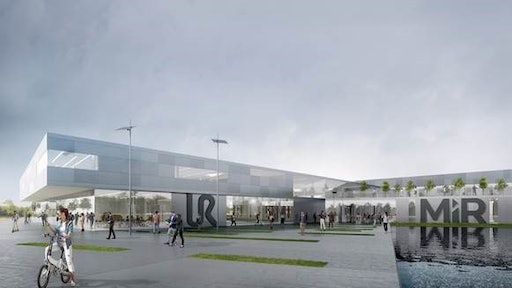 With financial backing from their joint U.S. parent company Teradyne, Mobile Industrial Robots (MiR) and Universal Robots (UR) have acquired a 50,000 m2 building site in Odense, where $36 million will be invested in the construction of a major cobot hub in the “cobot capital” of the world. Collaborative robots – or cobots – are now the fastest growing segment of industrial automation. Cobots are a type of user-friendly robots that can work closely with humans without the need for safety guarding, enhancing both work environment and productivity.

The new cobot hub supports Teradyne’s mission to further strengthen the significant leads that both MiR and UR have established worldwide.

“MiR and UR are leading the world in the collaborative robot revolution that’s making automation solutions available to companies of all sizes. Teradyne continues to invest aggressively in the development of new products, solutions, and sales channels and this new facility is a key part of our growth strategy,” says Mark Jagiela, President and CEO of Teradyne. “We have found something very special in Denmark. The Danes’ combination of innovative industrial design, combined with a practical business sense, have created a perfect combination for this emerging industry. The ability to make robots work in collaboration with humans in a user-friendly manner is something we have not encountered to this degree anywhere else in the world and we’re very excited to expand our capabilities in Odense.”

This is not the first time the MiR and UR owner has provided cash support for robot development in Denmark. To-date, Teradyne has invested more than half a billion USD in the two young Danish robotic companies, both of which are growing rapidly.

The building site is in Odense’s industrial district close to UR’s current headquarters, which will also become part of the new cobot hub. The two companies will continue as separate entities with the aim to create an attractive environment that will help attract new employees to facilitate the continued growth expected by the two companies in the coming years. “Denmark has a significant lead in the global market for cobots. Investing ambitiously in building the world’s largest cobot hub right here in Odense makes a lot of sense,” says Thomas Visti, CEO of Mobile Industrial Robots. “Offering a strong, professional environment with superb facilities enables us to attract talent from all over the world.” MiR has hired 100 new employees the past year, with UR adding 280 new staff members during the past two years. Today, the two companies have 160 and 450 employees respectively based in Denmark. UR employs almost 700 employees worldwide while MiR’s staff counts a total of around 220 globally.

Unique talent base in Denmark

Jürgen von Hollen, President of Universal Robots, sees enormous potential in the cobot market. “This is a market expected to grow to a total value of almost $12 billion in 2030, according to ABI Research. Demand for Danish cobots already means that we are growing out of our current offices in Odense, both at UR and MiR,” says the UR President. “Odense has a strong ecosystem of talent and we are pleased to have the opportunity to invest long-term in the unique robotics environment that we have been building here over the last 10 years.”

Danish robotics cluster on the rise

The Danish robotics industry is currently booming; the 2019 annual survey from trade association Odense Robotics shows that 8,500 people now work for Danish robotics companies, 3,900 of them in and around Odense, Denmark’s third largest city. If the industry follows the growth forecasts, the Danish robot industry will employ 25,000 employees in 2025, according to the Danish analysis firm Damvad.

And it’s not just the number of employees that’s growing. Danish robotics companies’ total revenue rose by 18 percent in 2018, reaching $995 million with exports increasing 26 percent. These figures are particularly significant in that just 15 years ago Denmark did not have any robotics industry to speak of.

Look to WiFi sutomation platforms for proactive, future-proofed insights that support improved operational efficiency across the board.
Wyebot, Inc.
June 14, 2021

By maximizing the availability of data for your warehouse operation, you are empowered to make more informed decisions.
Dematic Corp.
June 11, 2021

The critical goal is helping supply chain personnel to bubble up changes in in real-time, understand their potential impact and then determine and execute appropriate remedial action. Contextual analytics can play a leading role in this challenge.
Yellowfin
June 10, 2021

Ossia launches a new IoT system to keep track of trailers at large distribution centers. The goal is to increase safety and drive down costs.
Ossia
June 9, 2021

Research shows that the potential revenue generated from offering a lifetime service contract to an automation project is roughly equivalent to the original cost of the project.
Interact Analysis
June 8, 2021

Peak Technologies returned to the original company name in place since its founding in 1981 until Peak acquired Ryzex in 2011 and combined the names to symbolize the union of two industry leaders.
Peak Technologies, Inc.
June 7, 2021

J.B. Hunt and University of Arkansas launch a scholarship fund to grow inclusion in the supply chain.
J.B. Hunt
June 3, 2021

Will Eadie, CRO at WorkJam, explains how technology affects safety in the supply chain now that technology has taken over.
Brielle Jaekel
June 1, 2021

Averitt Express has opened a new distribution and fulfillment center near Dallas, less than one mile from its service center in Grand Prairie.
Averitt Express
May 28, 2021

In the latest podcast episode, Brielle Jaekel sits down with ISN EVP to talk about a recent report on workplace injuries that are rampant in the warehousing and logistics industries.
ISN
May 25, 2021

A PaaS model makes it easier to acquire new equipment faster and with less capital expenditures.
Rufus Labs
May 22, 2021

Triax Technology expands its wearable technology to push safety and operational efficiency throughout warehousing and other industrial sites.
Triax Technologies
May 21, 2021

Assistant editor Mackenna Moralez talks with Shane Smith, enVista about how the company shifted virtually during the COVID-19 pandemic and how that changed the way warehousing solutions got implemented.
enVista
May 17, 2021
Follow Us