Running With the Times 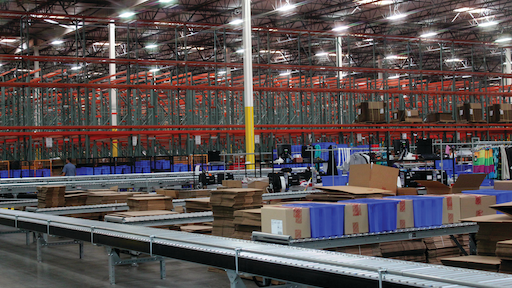 Converse has been one of the storied names in athletic footwear since its founding in 1908. Its Chuck Taylor All-Stars model, which debuted in 1921, has become iconic. But, as often happens, times change and innovative competition brings change.

For Converse, it was a long road from leader to bankruptcy to successful multi-brand, multi-channel player. The road became rocky in the 1970s when competitors like Puma, Adidas, Nike and Reebok came on the scene. The company lost its long-time status as official shoe of the National Basketball Association. Loss of market share and other business issues forced Converse to file for bankruptcy in 2001; it was then bought by an investment group.

That’s when the turnaround began. In two and a half years, the new owners led Converse from its position at No. 16 to seventh place. Then, in 2004, Nike bought the company for $305 million. But first, changes were necessary.

The most pressing need was replacing the 400,000 square foot distribution center in Charlotte, N.C., that serviced Converse’s production facilities in Asia. The center’s warehouse management system (WMS) used a pick-to-cart system that took five-to-seven days to process an order.

“The company was in a situation that needed a turnaround,” said Lloyd Wallsten, Vice President of Distribution for Converse, who joined the firm in 2001. “We needed to reduce cost, increase product and relocate from North Carolina to Ontario, California. We wanted a distribution center that could grow for the next five years, with a good design that allowed change as growth happened.”

“Converse came to us with an idea in mind,” said Bob Liebe, President of the Chino-Calif. division of Wynright. “They came to us to do a greenfield facility [where there is no need to remodel or demolish an existing structure]; we fine-tuned it and made it scalable. The backbone in the system is designed to work at least 10 years and we’re working to get it to 15. But the important part is that the backbone is scalable.”

The need for scalability proved to be prescient when, a few years after its 2002 acquisition of Costa Mesa, Calif.-based surfboard manufacturer and surf-related clothing maker, Hurley Inc., Nike asked Converse to start distributing the products.

“They asked us to take on Hurley e-commerce,” Wallsten explained. “They had a 3PL handling it previously but bringing it in-house brought in benefits of lower cost and service time. There were three different evolutions: footwear, apparel and retail. When we took on Hurley it really changed the dynamics. We brought in Wynright again to help us develop a material handling system and design a five-year plan.”

The company installed a WMS designed by Manhattan for footwear and apparel multi-brands.

“It requires a lot of ticketing. On the wholesale side, Converse and Hurley customers are large retailers like Nordstrom and Macy’s. Each has different requirements for price ticketing and outer carton labeling. We found a way to automate it.”

Lantech’s partnership with RMGroup Ltd will provide end-users with safe, reliable and configurable automation along with experienced system integration to develop an effective and flexible production line.
Lantech
July 13, 2020

A variety of c-suite executives have been hired in warehousing and other sectors in the supply chain.
Brielle Jaekel
July 10, 2020

In the past 20 years, outsourcing has become a prevalent aspect of the supply chain, but the pandemic's strain has companies rethinking their strategies.
Brielle Jaekel
July 10, 2020

The New Era of E-Commerce Logistics

This shift in the market, including longer lead time, is something companies need to start preparing for now.
Golden Ashby
July 10, 2020

Geek+ has extended its cooperation with Decathlon present in over 50 countries with more than 1,600 stores globally.
Geek+
July 8, 2020

The latest commitment builds on the USD 150 million investment that DHL Supply Chain announced in June 2019 to expand its U.S. distribution network for the industry and bring critical healthcare products closer to trade partners and patients.
DHL Supply Chain
July 8, 2020

Retail inventory valuations bounced back quickly in May and June as large numbers of Americans responded to retail re-openings by hunting for bargains at liquidation sales
Tiger Capital Group
July 7, 2020

For the vast majority of brands, retailers and clothing manufacturers it has seen a wipeout of the entire spring season but makers are confident trade will resume by fall, despite it looking very different.
GlobalData
July 7, 2020

Currently situated within the Westfield Mall parking area, the 2,200-cubic-ft. mobile DHL Service Point is the first of its kind in the shipping industry, providing a quick and easily accessible shipping option for customers.
DHL Express
July 7, 2020

The new fulfillment center, which is anticipated to launch in 2021, will create over 1,000 new full-time jobs with industry leading pay and comprehensive benefits starting on day one.
Amazon
July 7, 2020

Here's why retailers should consider shopping by appointment as part of its reopening plan.
NGC Software
July 7, 2020

When both facilities are complete in 2023, SK innovation will have the capacity to produce batteries for 310,000 electric vehicles per year to help meet consumer demand.
SK Innovation
July 1, 2020

The study offers insights into the demographics of how consumers are shopping, including age and gender, as well as the differences across online retail categories.
PFSweb, Inc.
July 1, 2020