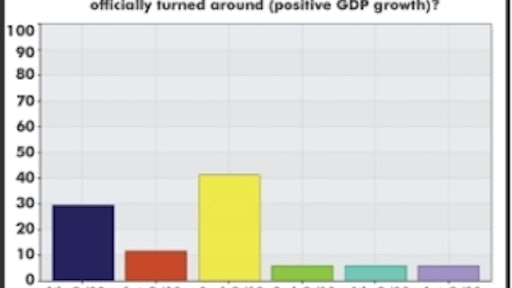 Raleigh, NC — September 24, 2009 — A majority of supply chain executives from leading high-technology, retail, consumer products and pharmaceutical companies believe that the U.S. economy will "officially turn around" in either the second quarter of 2010 or the fourth quarter of 2009, according to the results of a recent survey.

The survey, conducted earlier this month at the Supply Chain Leadership Forum in Chicago, shows that about 41 percent of the responding supply chain executives expect positive GDP growth in spring of 2010, while almost 30 percent believe the economy will rebound earlier, in winter of 2009.

"Your outlook on the timing of the 'Great Comeback' certainly depends on your industry sector," notes Bruce Tompkins, executive director of the Supply Chain Consortium. "For instance, food and beverage is already seeing some growth, but high-tech and retail will need to wait awhile before their industries experience more positive results."

Although they admit that the "Great Comeback" is right around the corner, more than 90 percent of survey respondents also indicate that they have not yet developed a significant comeback plan or the initiatives to carry it out.

"The smartest companies are shifting to recovery mode before their rivals by developing and implementing a strategic plan that anticipates the end of the recession and positions them for future growth," Tompkins says. "But even companies that were not significantly impacted by the downturn are pursuing aggressive supply chain improvements to strengthen their competitive positions."

On a similar note, most executives surveyed report that they are not prepared to capture government stimulus incentives for new projects. More than half say that their organizations are "not prepared" or "only slightly prepared" to take advantage of government incentives under the stimulus plan.

More information on the Supply Chain Leadership Forum is available on Jim Tompkins' blog series at http://gogogosupplychain.tompkinsinc.com/?tag=/supply+chain+leadership+forum. The 2010 Leadership Forum has been slated for August 31 - September 1 next year.

How to Upgrade Assets While Protecting Cashflow

As we look ahead to International Women’s Day (March 8), I want to take this time to commend, honor and acknowledge all of the women in the supply chain and logistics industry. It's because of you that I am not the only female in the room.
Marina Mayer
March 3, 2021

It is imperative to develop the processes and tools to map this information correctly and accurately now to build resiliency for the future.
Ivalua Inc.
February 28, 2021

Here are some critical lessons these small businesses can learn from the impact of COVID-19.
Pitney Bowes Inc.
February 27, 2021

With cost management top of mind for CPOs and other c-suite executives, it’s time manufacturers eliminate chargebacks as a line item and start leveraging the supply chain as a competitive differentiator – not a cost center.
CoEnterprise
February 26, 2021

A frictionless return merchandise authorization system is an integral part of adapting your operations to manage growth.
Ruby Has Fulfillment
February 25, 2021