The Jobs Artificial Intelligence Will Take Over

While the concept of an automated workforce might have been something initially relegated to the realm of science fiction alone, things are rapidly changing. 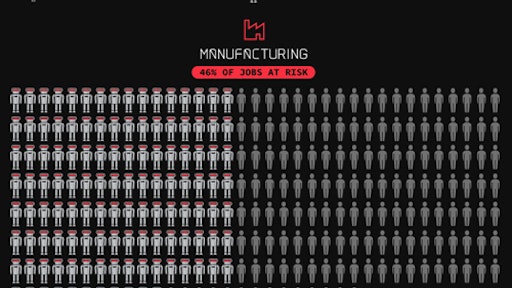 The metallic footsteps of a robotic replacement are clanking ever closer. While the concept of an automated workforce might have been something initially relegated to the realm of science fiction alone, things are rapidly changing.

As technology advances, we stand on the brink of an artificial intelligence (AI) revolution, which could see swathes of human jobs usurped. RS Pro have done their bit to look into this in detail, creating an infographic that focuses on the sectors most at risk.

Their research shows it’s not good news for a number of industries. Perhaps most at risk are those working in transportation and storage. The study found by 2030 as many as 56 percent of roles in this sector could be replaced by AI. While this area was heaviest under fire, it wasn’t alone.

Some other industries that need to be wary include:

Worried about the impact this robotic revolution could have on your financial situation? Be sure to hone up on a secondary skill before it’s too late.