A Rule That’s Time Has Come

Mandate on Electronic Logging Devices to become final; compliance will make everyone safer

It’s almost here. By the end of this month, the Federal Motor Carrier Safety Administration (FMCSA) is expected to publish the final rule mandating the use of electronic logging devices (ELDs). Two years later all carriers and truck operators will be required to have installed these devices on their vehicles. Paper logs will no longer be allowed.

While there has been some grumbling by carriers, it’s a generally popular advance. For example, trade organization, American Trucking Associations (ATA), is all for it. “For ATA’s members safety is the highest priority,” ATA President and CEO Bill Graves, has said, “and as such, we stand behind the agency as it advances a common sense solution to improving the safety of our nation’s highways…We know these devices can improve safety, so it makes sense for FMCSA to do all they can to encourage adoption of electronic logging devices.”

John Gaither, Regional Sales Manager East Coast of GPS Insights, has been following and advocating electronic logging for a long time. “I have a lengthy history in onboard computers and telematics,” he told me. “I did one in 1991 for Food Lion (grocery chain).”

It makes for a much safer fleet, he says. “Drivers are safer, more rested, conscious of their surroundings and less likely to be influenced by their employer or customers to do things that might be risky.”

Many food distributors embraced ELDs early on, as in the Food Lion example, on the theory that these logs allow them to observe driver behavior. “It makes good sense and value for fleets,” Gaither says. “The last thing a board of directors wants to see is their truck on the 6 p.m. news.”

This plays well with the hours of service rules. The driver will get a visual cue from the system that tells him (or her) there are three hours left and six stops to go and he (or she) is more than an hour from home. The driver can call in and ask what the next step is to avoid a compliance problem.

As you read this issue, which is crammed with valuable information, you’ll notice a different look. We’ve updated it for a cleaner, more airy look that will make all of our great content even easier to read. And for you “font geeks” out there, we’ve switched from Adobe Garamond (10 point font on point leading) to Adobe Caslon (9.5 on 13). Hats off to Art Director Kayla Brown for her great design work. Let us know what you think.

As I said, there’s a lot of great content in this issue: Everything from food track & trace to a status report on conflict minerals, to business intelligence and how CPGs are using social media techniques in their businesses. And much more. Enjoy the read. 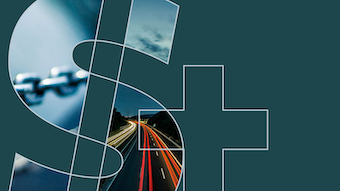