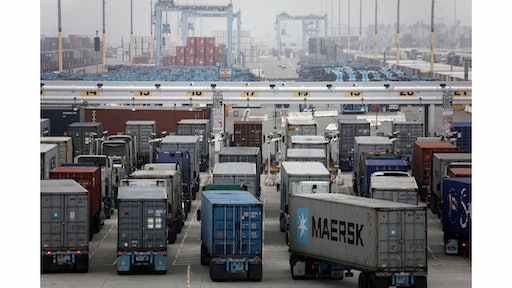 FILE - The ports of Los Angeles (pictured) and Long Beach, which form the largest port complex in the Western Hemisphere, reported a 37 percent jump in container imports from a year earlier, when both ports slowed to a crawl amid protracted labor negotiations. (AP Photo/Nick Ut, File)

March 17, 2016—Business groups that depend on shipping goods through the U.S. West Coast are calling on dockworkers and employers to extend terms of their labor contract to avoid a repeat of the congestion that plagued supply chains during the most recent negotiations, according to The Wall Street Journal.

“Agreeing early to a long-term contract will provide the stability and predictability our collective members need, while protecting against any self-inflicted harm to the broader U.S. economy,” said the letter signed by more than 100 retail, manufacturing and other groups that was released.

Last February, after a tense nine months of talks, the International Longshore and Warehouse Union (ILWU) signed a five-year contract with the Pacific Maritime Association (PMA). Dockworkers and port employers still dispute which parties were at fault for the bottlenecks that ground cargo movement to a near halt during the negotiations, but importing and exporting companies say the disruptions cost them business. “The costs were enormously high … We cannot afford a repeat,” the letter said.

The plea comes after presidents of the ILWU and the PMA said at the recent Trans-Pacific Maritime conference organized by The Journal of Commerce they would consider extending the current contract. That informal ascent came in response to a question at a public panel, and many customers of shipping lines and cargo companies remain skeptical that the officials will follow through.