Mexico, Brazil, South Africa, the U.S. and Russia Rank as the Countries Most at Risk for Cargo Theft Globally 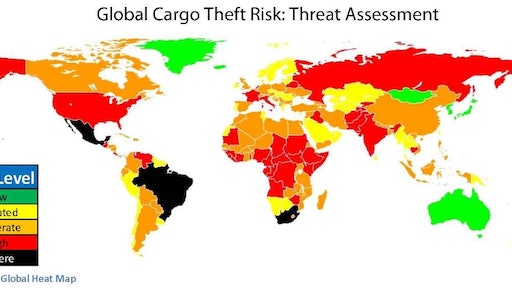 The prevention of cargo theft on a global scale requires intimate knowledge of incident trends on a regional basis, as security programs and mitigation techniques do not always transfer successfully from region to region, according to FreightWatch International (of Sensitech Inc.). The global logistics security services company, which aims to mitigate risks associated with cargo theft, identified that the greatest risk of cargo theft today exists in Brazil, Mexico and South Africa, as cited in its “2013 Global Cargo Theft Assessment” report.

In Europe, data collected and analyzed by FreightWatch International indicates pharmaceutical products are actively being targeted in some countries on a large scale for the first time. According to the report, Italy is becoming a pharmaceutical theft hot spot, with thefts more than doubling in 2012.

The most frequently stolen commodity in Asia in 2012 was food and drink products but other commodities are new targets in this region. Increasing demand for high-value consumables, such as electronics, is identified as the reason for the increase in cargo theft in Asia, based on incident reporting.

For the third consecutive year in the U.S., food and beverage (F&B) items were the product type most often stolen in 2012, accounting for 19 percent of all cargo theft, followed by metals and electronics.

In Mexico, the preferred method for cargo criminals continues to be hijackings, which occurred in 83 percent of all recorded incidents in 2012. Cargo theft is concentrated in several of Mexico’s largest cities because they are centers of industry and distribution hubs for cargo.

This report is courtesy of FreightWatch International.