With Support from JDA, Glazer's Leverages Collaboration to Keep Pace 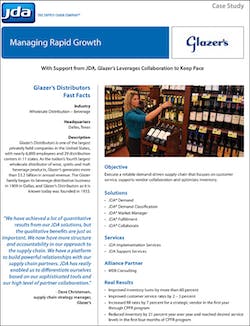 Glazer's Distributors is one of the largest privately held companies in the United States, with nearly 6,000 employees and 29 distribution centers in 11 states. As the nation’s fourth largest wholesale distributor of wine, spirits and malt beverage products, Glazer’s generates more than $3.2 billion in annual revenue. The Glazer family began its beverage distribution business in 1909 in Dallas, and Glazer's Distributors as it is known today was founded in 1933.